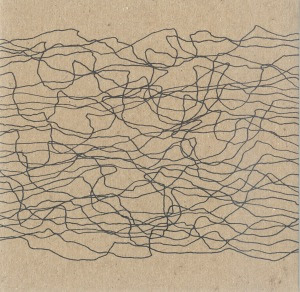 It's been a while since hearing anything from the bale hands of Tim Olive so it's good to report that his 2009 duo with the stalwart Alfredo Costa Monteiro is a solid, absorbing effort.

Both wielding electronics and metal of various sorts (I don't pick up any accordion or paper on the part of Costa Monteiro), they fashion a thick, rough, spiny set of two pieces, the music elbowing its way through, leaving shavings and unexpected bruises. The first track is quite packed but not overstuffed, several things usually in operation at a given moment--throbbing hums with erratic static and scoured metal here; when a couple of sources drop out, the remaining one or two acquire a ghostly effect, echoing, arguing. One of the impressive things is how varied the landscape is while feeling quite cohesive and of a piece. Not groundbreaking by any means and fans of the pair will find themselves in recognizable territory, but the decision toward fullness is one fraught with the "peril" of hyperactivity and these guys never get near that particular trap.

As with much good music of this character, it's tough (for me) to offer much more than a sonic description and perhaps to give an idea of the shape or scale of the piece(s). That latter is a subtle thing, but here one does get a feeling of breadth, of compass. The sounds range widely, shrill to deep, high to low, though the volume level is fairly consistent, resting in the medium zone and, as said, active without being overly busy. But, for example, when early in the second track, when you hear what sounds like large, hollow metal bars tossed down an empty, linoleum-tiled hallway (which I'm sure is not the actual source), it connotes something more than just the aural sensation, summoning a vague story line, some plot that can't quite be discerned. It's magical moments like this (and there are several) that make recordings like "33 bays" so valuable.

Don't let it slip by.