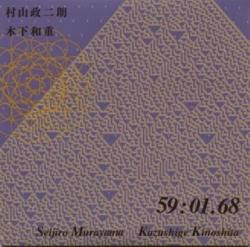 Percussion/violin, with five compositions by Murayama, each lasting precisely 11 minutes. Given the titles (with the digits, 1, 1, 3, 3, and 4 arrayed in different ways), one wonders if they're oblique homages to Cage and the first one indeed begins with the ambient sounds of...somewhere, before gently plucked strings and rubbed percussion appear. The piece, very subdued and evocative, goes back and forth between these two "locations" almost as though the pair would play, then open the window, close it and play again. Nice work. The first several minutes of the second track are all but silent, eventually filled with only the hushed flurries emerging like small puffs of smoke.

This is the way it goes throughout, kind of like an improvised Wandelweiser set (even though these are apparently compositions, they sound freely performed; I'm guessing it's something on the order of actions performed within time frames). Kinoshita is always quiet, Murayama mostly so, with the odd, brief sharp attack via stick on drumhead, just enough to keep the listener on his/her toes. The disc's cover is one of those old fractal cascades (I'm forgetting the specific name for this sequence), one that, for me, retains a deep sense of randomness within order, always a very lovely image. The back cover has, if I'm recalling correctly, a related set of numbers; presumably the track titles refer to five sets within this frame; perhaps so does the grouping of sounds. In any case, the results are engaging--relaxed though with a sense of rigor, restrained but not timid. In which Choi takes his trusty old malfunctioning CD drive and attempts to impose what he acknowledges are the cliched structures of dance music which, essentially, here entails the predominance of rhythms (Trigger being a new label formed by Ryu Hankil which "focuses on rhythmic sound".

Now, by its nature, the CD drive tends toward the rhythmic due to its internal functioning. I imagine getting it to sound arhythmic entails a decent amount of work. Choi also must deal with the alredy fairly narrow range of sounds available via this device; not really narrow, I guess, in an absolute sense, but occupying a range where most ears tend to group the sounds into a definable area. A daunting task, in other words, more so with 13 tracks spread over some 50 minutes. I find that I tend to listen to the disc as a single, fluctuating work though it's still far from an easy go. The (necessarily) mechanical beats put me off somewhat so that at moments where some sheer noise intrudes, I breathe a sigh of relief. There are occasions where the music actually approaches a traditional pop song kind of feel, at least from one direction where the listener can impute what almost amounts to chord changes; kind of amusing when that happens. Still, I find myself wearying as the disc progresses, just not picking up enough of inherent interest. Given that "touch" isn't going to be in the realm of possibilities here and sound placement has taken a back seat to the foregrounding of rhythms, on either submits to these rhythms and enjoys them as they're couched in the glitchy sounds, or not. For myself, this works ok in brief snatches but not so much in the long haul and, additionally, seems not to contain the kind of depth that reveals more on re-listening or approaching from various angles. an interesting experiment and, who knows, may lead to something in the future but for now, I'm not convinced.

It's output from a one-dimensional cellular automata. See here for pictures of various CA output (as well as of course the mathematics behind it):

Specially I'd say it's an image from Rule 30:
http://en.wikipedia.org/wiki/Rule_30

It does resemble a Sierpinski Triangle which is probably the fractal you are thinking of.

Yep, Sierpinski triangle was it, thanks!