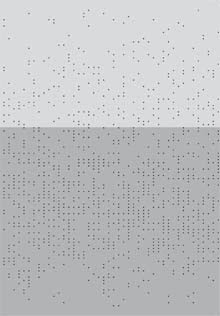 A simple structure made up of incredibly complex molecules, much like the natural phenomenon it seeks to emulate, consequently, in many ways as difficult to write about as it is to accurately replicate a stone. A wave (the first piece) and a series of waves (the second), inspired by sea waves, water molecules replaced by percussive figures (played with extraordinary grace and touch by Greg Stuart), "percussion" allowed a very wide definition.

Two pieces, each 35 minutes in length, each beginning with a minute of silence, the pair separated by an additional four silent minutes on disc, each scored for 100 instances of percussion.

As with much of Pisaro's work, it's quite possible to hear them as single, breathing entities and to be entirely unaware as to the intricacy of their construction. Like his inspiration, the scores are both complicated and disarmingly simple--essentially matrices of percussive elements (numbered) with their durations (often allowing the performer leeway in this regard), whether the given section has a crescendo or not and more or less how the element is to be deployed (for example, dropped items such as grains of rice or pebbles should be able to be heard singly). For the recording--one can only imagine a live performance--Stuart recorded all parts and assembled them.

Part I, "a world is an integer", is a single, cresting wave, comprised of 100 20-second modules, starting with ten percussive units (to give an example of the range, these ten happen to be: piano with scraper, seeds falling on glass plate, bowed temple block, two stones clicking, bowed vibraphone, bowed brake drum, bowed gong, seeds falling into a wooden bowl, dry leaves in a metal bowl and seeds falling on a metal plate. Here, as elsewhere, one can see that Pisaro groups sets of sounds in a non-random manner). Each unit is assigned a number of 20-second phases in which to sound, ranging from 1 to 6, by virtue of which overlapping Pisaro can mold the waveform; at its densest there are 50 sounds heard simultaneously. The performer's intuition on exact duration makes for a quasi-random element and imparts, I think, a certain shimmer to the piece. No crescendos are used here, as they are on the second work, so instead one hears a gradual, phased massing of sounds--there's a kind of self-similarity on the whole despite the constant variation of actual elements. This is one of the most fascinating things about the piece to me, one that truly replicates a core aspect of nature vis a vis, at least, the conceptual extent of humans' pattern recognition: it takes extreme concentration and probing to discern the amazing differences that make up something that we insist on mentally simplifying as a wave, a rock, a leaf. The music lends itself to either approach (ideally at the same time but, dammit, that's hard!)--being listened to as a gorgeous, rich whole, or parsed as an enormous collection of tightly woven bits, each different from the other, yet cohering. I imagine sitting in some large space, hearing a live performance, feeling the tide surge over me.

Part II, "a haven of serenity and unreachable", was inspired by Pisaro's observance of the waves at Big Sur, that they arrived with a periodicity of 15-20 seconds and that "every seventh wave would be a 'big one'". I think it's easier if I simply quote Pisaro's description of the process:

This section consists of 100 waves of sound. Sounds occur in the indicated groups of 10 (six in a row) and 40 (every seventh "wave") and begin every twenty seconds (according to the times given). Thirty seconds is allotted to each "wave". All (sustained) sounds begin very softly (same level as in Part I), sustain for a period of about fifteen seconds, have a slight crescendo (in any sound which can crescendo) for five seconds (cresting at the 20 second point), and then either fade slowly away or are allowed to ring (for up to ten seconds. Decaying or non-sustained sounds simply begin after 20 seconds of the wave have elapsed.

Here, the pattern, even though occurring over a fairly long stretch of time, becomes readily discernible, sinking into one's consciousness after several listens. Oddly, given the greater detail in the structure, I find it a bit more static in feel than the previous piece, as the seven-stage pattern goes through its iterations. This isn't a criticism at all; in fact, it more or less approximates what one experiences when watching waves, the surface uniformity of the activity. But, as with Part I, the details that go into the structure (and into waves of water) are in a constant state of flux, their elements always shifting. Each cresting, six minors and a major, are individual events, unlike any other if heard with enough care and consideration. Like many a great piece of music, that's in large part what these are about: coaxing the listener to really use his/her ears and mind, to integrate both the large and the small, to hear the patterns within patterns, to hear and see the world a bit differently when next one steps outside.

I agree; this one is extraordinarily good.

yep, by far the best Cathnor release so far IMO. kudos to everyone involved!

Thanks Brian, glad you enjoyed it. The release is ready to go here, but it will come out officially alongside two further Cathnor releases very soon. I have held it back a couple of weeks just to save on postage costs as hopefully people will order more than the one disc.

Hopefully the start of a good year for the label, much planned!

yep, this is a great one for sure. this Pisaro guy is really racking up the hits.

Assuming your comment was aimed in my direction... As many readers here might already know, I give away as many copies of Cathnor releases as I sell. I do try and sell a few though to try to cover the costs of production, something that as yet I don't think I've ever managed to do. I sell them at a low price and do not charge any postage costs.

I work long hours in the dayjob that supports the label, so it is hard for me to make multiple trips to the post office. As this is a very small corner of the musical world I tend to find from experience that a good proportion of the few dozen people that buy a CD will buy the next one as well. So it makes perfect sense for me to send them out in a single envelope.

Also, late last year I released three 3" discs together. Two of them involved musicians that were being discussed a lot, so those CDs were likely to sell fifty copies or so over time. By effectively giving away the third one for free I was able to get the music of the third release into the hands and ears of people that might be interested, at no gain to myself. I am hoping to be able to do something similar with the imminent set of three releases.

There are no sinister reasons for holding back the Pisaro, just practical ones that will recover my costs any quicker but might make the label easier to run and ultimately will support musicians a little better.

As for Rowe/Küchen, I don't know that release. Have they recorded a duo?

There are no sinister reasons for holding back the Pisaro, just practical ones that will not recover my costs any quicker but might make the label easier to run and ultimately will support musicians a little better.

That may just have been an Uli drive-by, no need to pay it much mind. Was thinking of deleting it, but your response, Richard, is probably worthwhile having out there if only to give folks a little idea of what goes into producing and distributing this music.

Brian, you don't moderate comments before publishing them?

No, I'd rather not do that. I like an open forum (with the exclusion of the occasional overt spam that gets through). If the assholeishness gets extreme, I'll step in, but routine assholeishness kinda comes with the territory....The post in question didn't, on my first read-through, rise to that level, though I was suspicious. I still don't really know the original intent, wouldn't want to jump to conclusions.

Still, I might have removed it only because of the nature of Michael's music which calls for much more mature responses. But once Richard replied, I thought it best to let things stay. Apologies to Michael...

Sorry Brian (and to Michael and Greg) if I made a mountain from a molehill. It did occur to me the post might have been from Uli but it didn't have any spelling mistakes in it so...

Feel free to delete anything if you would rather Brian.

At TWE I do not moderate comments but have a registration system in place. Anyone can register instantly without me having to OK them, but they have to provide an email address, which goes some way to putting off the anonymous posters. Then I have the most amazing piece of anti-spam software called Akismet running, which hoovers up the daily spam brilliantly. You see, switch to WordPress and all of this could be yours! ;)

Sorry,but this wasn't aimed at you at all;but,anyone selling CD's;I was joking to myself/you/anyone/help/?!- about the amount of money I spend on music -but strange,that so few words,could cause such a bizarre over- reaction...

I DO support this small world of improv-and appreciate what you all are doing...sorry it was misconstrued,but,don't worry,I put my money where my ears are:-)
(Of late I've over-tithed at Our Lady Of Another Timber)

i picked this up as soon as i could after reading about it here. i can already tell this is likely to be my favorite "experimental" release of the year. the inclusion of pisaro's and stuart's notes is a huge plus. it's very interesting to try and identify how the processes described play out over the course of the pieces.

i'm left wondering how much of the brilliance of this release stems from the score vs. stuart's interpretation of the score.

can the score be seen anywhere on line?

thanks and congratulations to all involved.

Hi Ryan--there is a score--I think it was linked to on the Cathnor site but I can't locate it now--I'll see if Richard can supply a pointer.

Ryan- so pleased you like it. As for the score, please excuse Great Uncle Brian, his memory isn't what it used to be. The score isn't publicly available, I sent him a copy by email to assist with his review.

It isn't my score to put up at the Cathnor site really, do I never have. I will ask Michael how he feels about this though. In the meantime drop me an email at Richard (at) Cathnor (dot) com and I'll see if I can help you out.

it's just my imagination or into that code, there's something hide, I mean you know like the code that was used in the WW II, well because looks like that code.