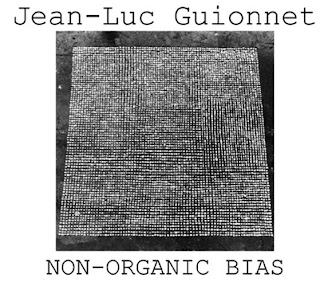 A two-disc set with three fantastic pieces, released (I think) early 2009, more or less for organ (I've no idea how much processing or overdubbing may have occurred), apparently from 1995 - 2005. The works are massive, with enormous depth and richness, undulating with their own logic, somewhere between or beyond Sun Ra at his densest and Xenakis. They're like huge clouds of gas and dust, throbbing here, dispersing there, huge electrical charges arcing in the voids at unpredictable interludes. The title cut (all cut assignations subject to error, btw, as there's some mislabeling) broods and swirls in an utterly alien manner for some 50 minutes--remember Arthur C. Clarke's brilliant (if tritely titled) "Rendezvous with Rama" where the alien ship simply glides through the Solar System, ignoring any attempts at contact, offering not a clue as to its whys or wherefores, then proceeding back out into deep space? This is kinda like that. Obsessive and wonderful. "Estuaire" (the single cut on the second disc) gets into the deep territory some listeners may recall having been approached by Sun Ra on work like "Atlantis" or "The Magic City", except the Guionnet has pierced downward into the earth's crust a few hundred miles deeper, down to where sound's travel-speed is reduced by mantle density. That estuary becomes lava-filled eventually, splitting seams, cresting, seeping into rock before cooling down. A fantastic set, get it. 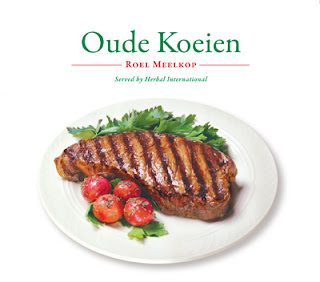 More Meerkop! Old cow, indeed. A compilation of sorts of largely previously issued pieces, culled from Korm Plastics (called "Korg" on the disc, for some reason) and other sources. Wide ranging, from "serious" to slightly goofy, it's never un-fun, never a chore to listen. I prefer the former, like the dark, throbbing and scratchy "Echt Dood", a recent (2009) piece, the equally mysterious "1 (Riktigt Dod)" from 1999 and the low, liquid hums of "1 (Veramente Morto")" Very nice stuff. It can get a little goofy--I admit that the first time I played it, the thumpy seventh track began skipping mid-thump and, after several minutes of not-full attention I said to myself, "Damn! This is pretty annoying!" Enjoyable work, overall. 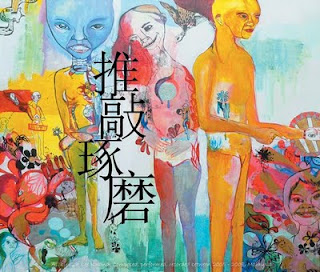 I'm not very familiar with Kwang's work, having only heard a smattering of previous tracks here and there, but from Richard's write-ups in the past, I was expecting more of a down 'n' dirty, near-noise fest than the oddly bloopy electronics encountered herein. That choice of sounds, knowingly (I take it) working with certain synth-y tones that, by their nature (to me, at any rate), connote various sf and prog-rock scenarios is a daring tactic; Rafael Toral does something similar on a spate of new LPs I'll be writing about soon. Sometimes it works, the distracting characteristics of the tones being transcended (as on "Hands III" here), sometimes it doesn't. In fact, all three "Hands" pieces are intriguing, with more meat than the trio of "Tape" tracks, or the three that wrap around these mini-suites, which combine those bleeps and gloops with vaguely rockish rhythms. Half and half overall, for me; would love to hear more work in line with the "Hands" pieces. 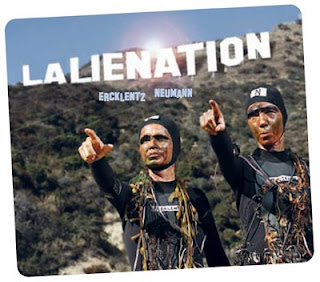 Helluva cover. The first two letters are capitalized on the Herbal site which, combined with the clear visual reference of the hillside sign and the less clear nod to...well, something, maybe Grade D-movies, one might have expected some commentary on entertainment culture but, if so, it's pretty oblique. Fine by me, as these six trumpet/inside piano duets are more than strong enough to stand on their own. The liner notes by Marion Saxer foreground notions of texture and that's certainly one of the standout qualities here--much of the music simply sounds gorgeous, the timbres of the brass and excited piano wire melding beautifully. It's also, in part, far more approachable than one would suspect, pieces like "Bialetti" having a firm rhythmic base, Ercklentz' horn echoing Bowie's bluesy romanticism. There are beats in play elsewhere, never too intrusive, always tempered with digressions into arrhythmia (!) and a good bit of quasi-melodic content. But the rigor with which the music is assembled precludes any too-easy digestion. Rather, the pair strikes a juicy, slightly itchy balance between the accessible and abstract, amply rewarding both aspects. The disc includes an MPEG4 file which, in my ignorance of all things ipodistic, I was unable to open. Don't let that dissuade you, though--a fine recording.

looks as though the Guionnet and Ercklentz/Neumann are also available from erstdist
Posted by Brian Olewnick at 4/10/2010 11:55:00 AM