A wonderful set. As has generally been the case in recent years, the nature of their respective instruments, saxophone and harp, is almost entirely disguised, replaced by electronic tones, shudders and pings. More to the point, they're paced beautifully, with great care assigned to timbre, volume and blending with each other. Butcher uses motors here a few times, presumably in his bell (?), heard to nice effect on "gallow gate", all rapid clicks, like a mouse wearing metal sneakers is scurrying around his horn. Some of Davies' more recent work has verged on the excessively ambient for my taste, but here there's precisely the right amount of sand in the mix, not a trace of wooziness. The lengthier of the seven tracks, around nine to ten minutes, are especially rich; could've gone on longer. Even the Parker-esque explosion of sputters that Butcher lets loose on the final cut (an asynchronously recorded one) are well-positioned against Davies' shimmers, the latter derived from an aeolian harp; here, two elements that might normally trouble me are juxtaposed so as to cancel out each others' potentially aggravating characteristics (aggravating to me, that is)--rather fascinating how that works. Excellent recording, listen. 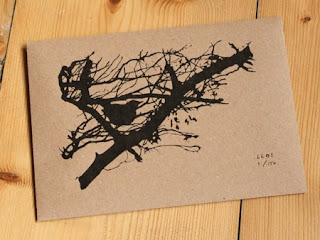 A demure, lovely package by Rodgers, from whom I'd not heard in a while. A 3" disc arriving in a brown envelope with a postcard and seven photos of branches, with and without birds, taken at twilight. One hears the birds (and wind) and Rodgers' delicately played guitar. It's quite personal, dreamy and bucolic, the music coming and going amidst the field recordings, always tonal (think of an even more melodic Burkhard Stangl), always...deferential, as though he'd be perfectly okay with stopping if someone came along for a conversation. It gets a little more agitated on occasion--on the brief third track, the birds almost sound like tambourines accompanying the busier guitar and the fourth hints obscurely at funk--but it's by and large a calmly active (like birdsong), ruminative set, fitting for contemplating birds at twilight.

I honestly never expected that Mr. Chadbourne would ever enter my collection again! Here he consorts with New Zealand guitarist for six tracks, two by Steve Lacy and four by Eric Dolphy. I did in the past tend to prefer Chadbourne when he was doing covers (I've never knowingly heard Malcolm before) and have an abiding love of both composers here, so...well, it's rather blandly competent. The pair pays close heed to the melodies, take them outside as one would expect, Chadbourne pretty much reining in his more flamboyant tendencies, but it's perhaps a bit too halfway about things, neither rigorous on the one hand nor wildly imaginative on the other. Fans of Chadbourne (and, I assume, Malcolm), will doubtless enjoy; I found the session rather blah.

btw, this and the following release, "The Ames Room" are issued on LP (though the review copies arrived on CD)

The Ames Room - In (Monotype)

Now, here's a pleasant surprise! A raging, unabashedly free jazz trio that works. Jean-Luc Guionnet (he of the excellent organ disc, "Non-Organic Bias") on alto, Clayton Thomas on bass and Will Guthrie on drums. Two non-stop live onslaughts of intense jazz-based improv that manages to avoid almost all the self-indulgence and gabbiness of the huge majority of such attempts in recent decades. How? I'm not sure, though Guthrie's amazingly solid and imaginatively propulsive drumming certainly helps and Guionnet, for his part, somehow manages, though he virtually never takes horn from mouth and is generally in screaming mode, not to place himself at the center of attention. One automatically thinks of comparisons; somewhere between Lyons/Sirone/Cyrille and Mitchell/Favors/Moye? These sets have all the great energy that those trios may have had in the 70s. Even so, is it an open question as to the viability of such an approach in 2010? Most assuredly, but The Ames Room makes a strong case. btw, I'd forgotten the association until I looked it up, though I'd seen it many a time, but the original "Ames Room" is that 3D optical illusion as seen here: 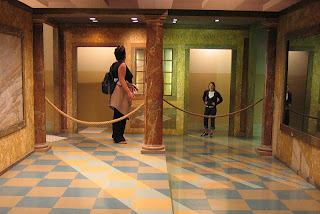 Hard to define, but I like that allusion vis a vis this trio's relationship to classic free jazz. Check it out, in any case, especially you die-hard jazz fans....

I think that it is one of the most interesting things, I remember that when I was in the school I used to play with remixed the music, so I think that it was my best time in the childhood!22dd