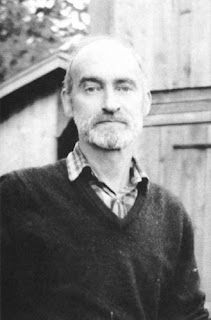 Went to hear Christian Wolff perform some of his music last evening at the Merce Cunningham Dance Company space. To the best of my recollection, I'd never heard his work performed live, having only experienced it via the seven or eight discs I've picked up. Not that those recordings are necessarily representative or that they're not subject to the vagaries of the non-Wolff performers, but I've generally found the music tough sledding. To my ears, there's a tinge of academicism present (maybe too many Mode recordings in the bunch!) which doesn't help me steer through the essential knottiness of the compositions. But, of course, that may well be just me.

So I was prepared for a night of difficult listening and got it, though not in the sense I expected.

I guess there were two main surprises. One was how relatively conservative much of the music struck me, in a kind of post-Neo Romantic vein. Second, was the absolute predominance of "notes" as opposed to "sounds". Not just that it was virtually all written as near as I could tell, but there was--to put it perhaps too vaguely--more of an interest in "sonic colors" than the sounds themselves. This plus what I felt was (on the part of several of the musicians) an overly studied way of phrasing caused several of the works to pall a bit. Since this wasn't an working repertoire group but rather an ensemble hand-picked by Wolff, I have to assume they were rendering his music as he wished and maybe I'll come to see the wisdom in his choices, but for now, I don't quite get it.

Things were too clean, in a word. My exposure to Larry Polansky's own work has left me feeling similarly; I just find his guitar sound entirely too smooth and characterless. What I wouldn't have given for a certain Nantes-based guitarist to be occupying that chair, improvising within the complex structures Wolff created. I had similar qualms with the violinist and, especially, the percussionist. The cadences fell on the wrong side of the delicate/prissy line, sounding too much like every other contemporary piece you've heard since 1960.

This is not by any means to say that there weren't beautiful moments. The Exercises especially created a fine sense of space and the give and take between instrumentalists was playful and enjoyable. #18 used a good deal of small percussion, Wolff manipulating stones, small patterns emerging that bore a whiff of Reich, a lovely 6-note piano melody coming and going; a delightful piece all around. The closing Exercise as well, with Polansky thankfully switching to mandolin, occupied similar ground, though more "expressive" in a emotional sense.

That was the rub in some of the other works--they seemed to uncertainly balance between pure melodicism and academic restraint. On "Jasper", a duo for violin and bass, Fain seemed just about to launch into virtuoso paroxysms; I didn't want him to, but on the other hand, I felt, "If you're going to do it, do it!" Though perhaps that was Wolff's point, dunno. The episodic nature of many of the pieces left a certain amount of dissatisfaction, though having just re-read Calvino's "If on a winter's night a traveler", I probably should have been listening with that in mind, with that sort of playing with the listener's expectations. I did want to hear far more grit, however, more elaboration on sound.

Big crowd there, filling the house. Props to Joey Baron for showing up. I had a good time sitting next to David Behrman and Robert Ashley, listening in. Merce Cunningham himself was in attendance, in a wheelchair, looking frail but attentive and appreciative. And my friend Julie, who I don't see nearly enough, made a surprise showing.

I was able to speak a little with Wolff after the show and hope to do so more, at greater length, re: AMM & Keith.

Thanks for the report Brian, I sure envy you this experience. Sometimes I wish I lived in the NYC area. I've only heard the Exercises that were on that program so lots on new Wolff there. Hopefully some more recordings will get made, I think he is woefully under recorded.

I'd forgotten about this but a while ago Steve Smith had forwarded me some descriptions of the Wolff pieces which flesh them out a little more:

Exercises 1 and 10 are from a first set of 14. The instrumentation is open. Each player has the same music, single lines in one voice, sometimes two, with varying lengths of melodic material. When and what to play, the length of gaps between phrases, and whether to read the notes in treble or bass clef, are free. Exercise 18 is a quartet from a second set, using free instrumentation. Each player has their own line and the melodic bits can be repeated before moving on. Each player proceeds independently, though occasionally a line moves from one player to another, each having to listen, pass on, and pick up the line. Grete is in memory of Grete Sultan, who was my piano teacher. It continues an earlier project of short pieces (the original requirement was no more than 100 notes per piece, or fewer). The instrumentation is open. Jasper was written when Robert Black asked for a piece featuring contrabass and violin. It's also a tribute, and the notation at one point spells out (visually) the name Jasper (Johns). Some folk song material, notably the Southern dance tune, Cindy, finds its way into the music. Duo 7 was written specifically for Robyn Schulkowsky and myself. The first was an ad hoc free combination of two previous pieces (Snare Drum Peace March and Melody). We both proceed independently and, now and again, according to specified coordination.

Wish I'd known to look for the Jasper signing!

Very interesting, thanks for that. BTW did you grab the AGP Christian Wolff releases? If not check them out here and here. These are FLAC files so you can burn them to a CD at full quality. You should definitely check out For 1, 2 or 3 People which was performed by David Tudor and Burdocks in the first link.

Thanks Robert. I tried to figure out FLAC usage a couple months back with a couple of AMM files but got nowhere. Need FLAC tutelage.

Okay, you are on Windows correct? So download this file. This is an exe so run it once it is downloaded. This will create a directory in Program Files called FLAC. Inside this folder is an exe called FLAC frontend this is the thing you want to run. Run this and it brings up a dialog box with a number of options. Click Add which brings up a dialog box that you can navigate to where the FLAC files you wish to decode are. Now you need to select all of the files in the list. Do this by clicking on the files while holding down the control key. When they are all highlighted press the Decode button. This will convert all of the files to WAVs which are raw audio files. This can then be burned to disc by your normal method or converted to mp3s or whatever format you like.

I hope that helps, feel free to email me if you have any questions. One other thing to consider is that there are some cd burning programs that can burn FLACs directly but I'm not familiar with those. But worth looking into if you've bought a cd-rom burning program.

Unless you had a chance to look at the score, I don't think you could have seen the "Jasper signing".

I'm pretty sure that Wolff's note refers to letters formed by the shapes of the notes on the staff, not some kind of gestures performed by the musicians.

Herb, you could well be correct although one part of that particular piece that was off-putting to me was the extravagant gestures, especially on from the violinist. Like friggin' Paganini up there, I tells ya.

Brian, I don't doubt that you could have seen unsightly histrionics at this or any concert (when I lived in Seattle with a lot more live music that I cared about, there were certain musicians that I would only go see in venues that afforded obstructed views so I could position myself behind a pillar or some such object & hear more than I could see).

However, the cover of Mode's CD of Robert Black's recording of the work with Robin Lorentz, shows the score excerpt in question:

FWIW: Grete was actually commissioned by Relâche and was premiered September 2007.