So, I'm down to the last three occupants of my "B" vinyl section. I guess the Burrell album is a relative rarity; it's also a really nice one. Three pieces--first is a enjoyably romantic/free medley of themes from "West Side Story" with Norris Jones (pre-Sirone) and Bobby Kapp, plus Pharoah Sanders assisting on tambourine. "East Side Story" is a lengthy free excursion with Sonny Murray manning the drum kit. The real joy is "Margy Pargy", one of the happiest ditties you'll ever come across.

Burrell was always a favorite of mine, especially his work with the David Murray quartet of the late 80s and the Archie Shepp group documented on Arista around 1975.

I have a Don Byas double album, The Savoy Sessions, things recorded in the mid-40s. I have no idea how I came to own this--maybe lifted from my Dad's collection? Couldn't work up the interest to give it a spin yesterday, though. 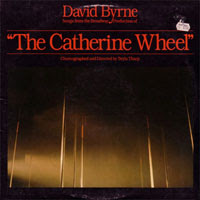 Back around 1980, my brother Drew stayed with us for about a year while we were out in Corona, Queens. I'd been paying little if any attention to the punk and new wave of the preceding five or so years but he was a big fan so I heard a bunch of stuff, generally enjoying Talking Heads, Pere Ubu and others. We went to see Talking Heads in Central Park, I guess it was '81, the first rock concert I'd attended in seven or eight years probably since Mahavishnu around '74. I figured, judging from their records, that the Heads would be different from your standard rock show, grinding out songs from existing albums identical to the recorded versions. Wrong. Really disappointing, note for note recreations, down to the guitar solos. To this day, I don't understand this approach. Why bother? Why attend? Is seeing your admired musicians going through these motions so important and fulfilling? Yecch. And, true to form, the crowd acted like crowds tend to, automatically cheering everything served up, forcefully reminding me why I went out of my way to avoid these chilling, quasi-fascistic gatherings.

Anyway....I picked up this album not long after, probably spurred by Eno's presence. Holds up fairly well, some good tunes, intended for a Twyla Tharp production. Lotsa Eno to be heard. Not that I by any means am aware of Talking Heads discussion these days, but I don't seem to hear this one mentioned very often. My interest waned pretty quickly (I think I have the Stop Making Sense album, that's it). I remember a Byrne disc that came out around 1985--The Knee Plays?--that copped the theme from "Theodora Is Dozing", the ultra-gorgeous Bulgarian song I first heard on the Nonesuch sampler back in the early 70s, giving himself composer credit. Kinda pissed me off.

Throw caution to the wind & drop the stylus on that Byas, Brian. It's a good set & has some nice sides w/ Slam Stewart among others. Then again, I supposed I'm kinda Byased (ouch, couldn't resist).

Derek, no Bags miraculously reappeared at home over the weekend. Thought you might have done something.

Yeah, I'll get back to the Byas. It's one of those I come across in my collection and go, "Wha? How'd that get there?" I noticed Stewart was on some of the tracks, a player I normally enjoy.