I went over the historical whys and wherefores of Bryars' "Sinking of the Titanic" and "Jesus' Blood Never Failed Me Yet" enough back in November on the occasion of my hearing a (not very good) performance of his early works. But the original Obscure recording still sounds mighty fine.

I file this one under "Bryars" as well, though Hobbs might be more appropriate. His "Aran" is a lovely, slow percussion march (Hobbs, John White and Bryars manning the armory), all cloudy references to ancient Eire. It was written in 1970-72, not so long after he left AMM but sounds absolutely nothing like anything that emerged from "The Crypt".

I guess this was the first I ever heard John Adams, though I can't say it registered as strongly as his "Shaker Loops" did a few years later. It does include a talk radio excerpt in its second movement, "Christian Zeal and Activity", a clear antecedent of Byrne & Eno (who produced the session). Very different thing, of course from AMM's radio usage as this is a "composed" part of the piece. The final movement is a kind of interestingly spacey and loopy reworking of "Sophisticated Lady". Not a bad piece, overall.

"1, 2, 1-2-3-4", by Bryars, was the piece mauled last November by the ensemble using Beatles references. Here, the base is a smoky jazz number that swiftly tumbles into its constituent parts as the musicians play their roles in aural ignorance of each other. As I think I mentioned before, there's a great dreamlike effect achieved, something that anticipates Badalamenti's music for Lynch. The ensemble includes Derek Bailey and Cardew (on cello). I note in the mini-bio on Hobbs, Tilbury is mentioned. I can't tell you how much this irks me to have had Cardew on record (here and on Reich's "Drumming" and Tilbury's name around in the goddamn mid-70s and being otherwise clueless about their music for the next 20 years. Why wasn't the Net around when I needed it?!?! 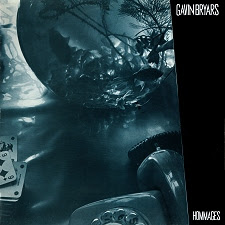 "Hommages", originally issued on Les Disques du Crepuscule around 1981 and finally due, as far as I know, for re-release on disc this month, remains a throughly lovely outing. Four pieces (two more to be added to the disc) for piano, vibes and soft percussion, in a loosely minimalist vein but suffused with sharp-tanged nostalgia, like walking through a fondly remembered old neighborhood at night, a gentle snow falling. OK, the Holst tribute/knock-off might be a bit much....Actually, maybe there are more connections regarding the other "hommages" than I'm aware of. Others are in respect to Bill Evans and Percy Grainger, neither of whose work I'm overly familiar with (always had a blind spot for the former). I will admit that "My First Hommage", the one for Evans, is the piece that holds up better than the others, but still... 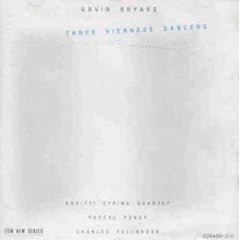 "Three Viennese Dancers" (1986) was Bryars' initial recording for ECM and can be heard as something of an extension of "Hommages", though with more overtly dramatic elements. I'd probably consider it the best of of his run there. While at the time I enjoyed several of the subsequent ones, I get the sense I'd have more trouble with the these days. Bryars' String Quartet No. 1 is richly performed by the Arditti and a really nice work while the other major composition, "First Viennese Dance", for french horn and percussion, strays a bit into the woozy and points the way toward a good bit of his later music. An odd feature of this record is that the brief opening piece is repeated at the end. Not a different performance of the same piece, but the same recording. I think, unless it's an incredibly mimetic recreation. Odd.

I followed Bryars' path until the late 90s; "A Man in a Room, Gambling" (1998) is the last thing of his I've heard. As I said, I generally liked at least some of each disc enough to continue, but the returns gradually diminished to a point where I gave up. I've recommended it before and will do so again: if you can find the Les Disques du Crepuscule release of "The Sinking of the Titanic" that was recorded in 1990, pick that sucker up. Better than the original.
Posted by Brian Olewnick at 2/09/2008 10:40:00 AM

I've always loved "Christian Zeal and Activity". Thanks for reminding me of it, I'll dig it out right now.