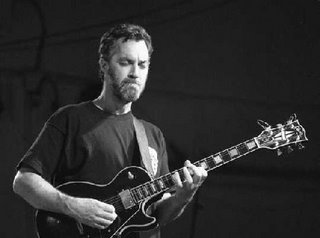 The Vision Festival. This was its 11th year now meaning, for me, that just about when it began, I was drastically losing a lot of interest in the genre of music it tends to showcase. That is, free jazz of the ecstatic variety. Combined with a high dosage of tawdry, new-age mysticism, miserable "poetry" and more-than-occasional forays into trite "interpretive" dance and they'd come up with a formula guaranteed to keep me at a distance. Nonetheless, I'd formed a strong personal connection with many posters at JazzCorner over the past 6-7 years and there developed something of a tradition for said posters to congregate in NYC around the time of the Vision Fest, thus causing me to attend a number of events in recent times. Even with a fairly cynical attitude going in, I do try to maintain an open mind (not always the easiest of tasks in the face of, um, performances by the likes of Budbill and Patricia Nicholson) and, amid a welter of humdrum, "spiritual" apotheoses, there would emerge the occasional marvelous concert. One such was, two-three years back, the Fred Anderson/Harrison Bankhead duo, an avalanche of creativity, of real free music by two masters. Last year's Nicole Mitchell quartet was similarly excellent, reminding me of a fine Randy Weston show sans the towering pianist. But wading through the dross was often a serious challenge. I still shudder at the recollection of an amazingly noodlesome outing by William Parker and Billy Bang, in which neither had more than 2 minutes worth of things to say, though that didn't stop them from playing for an hour or so. Worse, their performance was augmented by the aforementioned Ms. Nicholson. After 15 minutes or so of the most godawful "dancing" you'd ever want to witness, she exited to multiple sighs of relief....only to re-emergea little bit later, after a costume change (!), to flounce around for another exceedingly long time. The horror....

Undaunted and ever hopeful of experiencing the odd moment of bliss, I ventured down to the Orensanz Center once more last Thursday. Aside from having a few musicians on tap that evening who I was quite interested in hearing (Paul Rutherford and the duo of George Lewis/Bill Dixon in particular), the JC crowd in town this time included a couple of guys who I'd never met and very much wanted to: the illustrious Cem Zafir from Vancouver and the Yucatan's own free music acolyte, Gerardo Alejos (I may have his last name entirely wrong). We convended at Samba Le, a nice little Brazilian resturant (guided in all things gustatory by the ever-reliable Pete Cherches) where it was also a pleasure to re-meet Jan Strom, owner of Ayler Records, as well as Joe, Neil, Clay etc. JC vets all.

The Rutherford trio (with Torsten Muller on bass and Dylan Van der Schyff on drums) opened the evening and were, for myself, pretty disappointing. I understood later that Rutherford isn't in the best of health but it wasn't his playing as such that was the problem, much more the trite approach and banl structure. Absolutely nothing you couldn't have heard (better) 30-40 years ago. The same solo-y format, the same over-busyness, no appreciation for space or silence. Van der Schyff in particular was way too clatter-y and intrusive; Muller was the most interesting, but not enough. Desultory might be the general term I'm looking for. Cem and I decided to ditch the Coltrane tribute (which later reports indicated was rather good) to hoof over to The Stone for a Joey Baron/Ikue Mori set. Now, I'm not the biggest fan of either these days but for what he does, Baron does a damn fine job. He's a very traditional drummer I think; he's simply really, really good at being that and was a small joy to hear. Mori, on laptop, generated surprisingly clean and pretty boring sounds. Given what even pop-conscious musicians like Fennesz are doing with similar set-ups, I've no idea why she doesn't throw more dirt into the works but, as it stands, her contributions were notably weak. I recalled seeing her 7-8 years back at the Knit, playing electric keyboards in a quartet with Derek Bailey, Zorn and Kramer and she absolutely blew everyone off the stage. Dunno what's up now. In any case, I just sat against the wall (full house!) and enjoyed Baron's imaginative, if straight-ish, battery.

Back to Orensanz for the tail-end of the Day & Taxi set--sounded OK, though pretty sure it was something that wouldn't have held interest for me too long and settled in for Lewis/Dixon. A sheet was draped behind the stage for video projection. Might as well get this part out of the way: The video, presumably done by Dixon as it featured his paintings in large part, might be the single worst, most pretentious/amateurish piece of video-crap I've ever seen in my life. I mean, it was bad, bad, bad in ways I'd rather not even think about. Happily, my standard way of observing musical events is, in large part, with eyes closed so after determining that the nonsense on-screen wasn't likely to change in any appreciable manner, I lowered my lids. But the music....Lewis has long been my favorite trombonist, jazz or otherwise. His tone is just so gorgeous, his ideas deep. Dixon, otoh, I've gone back and forth on. I greatly appreciate his early work in Cecil Taylor's ensembles (Unit Structures and Conquistador!) as well as several of his own as a leader (Vade Mecum). Then again, as an avid, long-time listener to WKCR, I've often been subjected to "Bill Dixon Radio", multi-hour ruminations from his bastion in Bennington wherein Prof. Dixon blathers on about anything that comes to mind, generally in the manner of a self-righteous, pompous, effete ass. Well, I didn't have to listen to him talk that evening and his playing was superb, all the more so for an 82-year old. Unlike many of the so-called "free" bands, this was actually freely improvised music. Lewis interjected some low-level laptop noise and both musicians tended to stay in the soft zone, though navigating freely from higher to (very much) lower pitches. The music flowed without ever becoming too smooth, always retaining some granularity, each nudging the other into surprising areas. No silliness, no mystical nonsense--just a profound conversation.

On Friday, I skipped the Viz Fest proper but went out to Mo Pitkin's to attend a midnight jam session featuring Dennis Gonzalez. Dennis, in addition to being the only person I've ever met with exactly the same birthday as myself (08/15/54) is simply a fine, fine musician, open to all sorts of influences. His two sons, Aaron and Stefan (bass and drums) supply added fire in addition to tilting their Dad toward metal and noise on occasion. They were joined initially by tenor saxophonists Rodrigo Amado (from Portugal) and Remi Alvarez (from Mexico City), both very enjoyable players, the former possessing the odd but intriguing tendency to play slowly and softly no matter what the context of the piece. They worked their way through several exuberant numbers from the Yells at Eels songbook before being joined by Sabir Mateen (alto), Matt Lavelle (bass clarinet) and Ernest Dawkins (alto). Lavelle was rather weak but Mateen and, especially, Dawkins were in fine form, roaring away. Very good evening.

After an afternoon in dba's backyard and then downing possibly the best Cuban sandwich I've ever eaten (arggh...I forget the name of the place, south of Katz's) it was back to Orensanz. Steve Swell's moronically named Slammin' the Infinite was first up (Swell, trombone; Mateen, reeds; Jonathan Blum, piano; Mark Heyner, bass; Klaus Kugel, drums) who were fine in their high energy fashion and came up with a few attractive heads but, overall, eh. Very hard for me to care about this sort of thing these days. Roscoe Mitchell's quartet (Corey Wilkes, trumpet; Bankhead, bass; Vincent Davis, drums) was next and, again, they did what they do very well, but not substantively different than anything you could have heard from Mitchell since the mid-80s, including the circular breathing on soprano that he introduce on 1986's "The Flow of Things". Roscoe is an all-time favorite musician of mine, but I'm sure I'll be spending my future listening to him predominantly in the 1966-80 period (Sound to Snurdy).

Ah, but then Barre Philips and Joe Morris. Morris (pictured above) has been a rather cantankerous presence on Bagatellen for the past year or more, taking great exception to any number of things written about him, his music and some of his musical associates. None from me, btw. I bought his "Flip and Spike" disc when it appeared but wasn't too crazy about it and, to the best of my recollection, have heard little of his work in the interim aside from the odd thing on radio. I've usually enjoyed Philips' playing though I'm not at all up on his oeuvre, so I went into the performance perhaps not expecting all that much. But what a lovely show. As with Lewis/Dixon and unlike most other bands I caught, the pair actually freely improvised. It had all the traits of a subtle, warm, sometimes argumentative conversation, the two exchanging ideas politely, sometimes forcefully, always with great imagination. It ranged from extremely abstract to all but in-the-pocket, never forced in either direction, simply driven by what had just been said. Philips went through a gamut of techniques but, again, never with the sense of showboating. Morris, aside from the occasional harsh scrape or tap, plucked clean, quiet tones like some avant Jim Hall. Excellent work. Afterward, I went up to Morris (whom I'd never met) and whispered to be careful, that the Bagatellen spy contigent was in the house. He laughed and took it in the good humor it was intended. I overheard him say that it was one of the best sets he'd ever played. I don't doubt it.

So, by and large, the sets I caught this year were of far higher quality than in previous years. I'm sure some of that had to do with increased judiciousness on my part as to which ones to duly avoid but still, give credit where credit is due, they booked at least a couple of winners. We'll see about next year.
Posted by Brian Olewnick at 6/22/2006 11:10:00 AM

Nice review, Brian! It was a pleasure to meet you too. And you got my last name right, thanks!