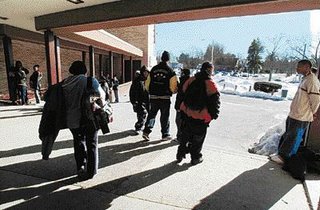 I graduated from Poughkeepsie High School in 1972. That's the front entrance there, though our clothes weren't quite so baggy back then...A lot of people are, if they are at all, most nostalgic for their college days but for me it's always been high school. Part of that has to do simply with the people in and around my class, a really extraordinary group. Not just subjectively but also objectively in terms of academics. We shattered previously existing records for things like National Merit and Regents Scholarships. In the former, the prior year had set a record with something like eight finalists. I think we had 46. I mean it was ridiculous. But there was also a tremendous amount of creativity, especially in the arts, including some nascent film-making (Jeff Stein, later to direct "The Kids Are Alright" and a bunch of award-winning music vids was a classmate and we did a bunch of guerilla filming). But college happens, people disperse, there was no Internet or e-mail to keep in easy contact and we gradually lost track of each other. I kept in touch with a handful of friends from back then (and earlier) but there were a number of folk I was always very curious about, wondering what became of them. Others, in retrospect, seemed so clearly on a similar wavelength to mine that I'd think, "Why on earth didn't we stay in touch?"

We had a 20th reunion in 1992. It was rather bittersweet for me. Bitter in that most of the classmates I was seriously interested in seeing didn't show. Sweet in that some people who I probably hadn't thought of once since '72 did show and turned out to be extremely lovely. Still, '92 was slightly pre-Net and e-mail so most of us (as far as I know) once again drifted apart. Hasn't been another reunion.

Fast forward a few years to the point where most everyone has a PC at hand day and night and, of course, I would routinely search around to see if I could ascertain the activities of various folk of interest (a few from college--Vassar and the School of the Museum of Fine Arts in Boston--as well). It was fun detective work. You had to deal with common names and figure out methods of attack to narrow things down. Even though women my age were reasonably likely to retain their maiden names it wasn't always the case by any means, making searches far more difficult. But here and there, I'd find people, often still up around Poughkeepsie, sometimes far, far away.But I'd never pull the trigger as far as mailing them. It just seemed too weird to suddenly pop up after 25-30 years, saying hi. There's a lot of presumption involved: assuming the person would want to hear from you or, indeed, anyone from that era. Some people, I've found, prefer to close off certain periods for this or that reason. So, I googled around but kept the results to myself.

In early 2002, I went to the Classmates site, having encountered their annoying ads often enough. Of course, I went to the PHS area to see who was registered from my graduating year. By and large, the persons on board at the time weren't those I was particularly interested in but there was one glaring exception: Carol Pavitt. Now, I'd known Carol since we were 10 and had always been extremely fond of her (I recall being chastised by our 5th grade teacher, Mrs. Brousalian, for playing "footsie" with Carol underneath our desks!) and we'd been pretty close later on, especially in our senior year when we both worked on the yearbook (art) and school play (set design). I hadn't seen her since June, '72 but she was one of the main people who fell into that "why the hell hadn't we kept in touch?" category I mentioned above. Thinking back on her, we seemed to have so much in common, both interest- and personality-wise, that it was unthinkable that we wouldn't have remained close friends. But I had no idea why this hadn't occurred. Anyway, registration in the site was free, so I did.

About a month later, I received an e-mail. From Carol! Among other things, she wondered if I remembered her. Um, yes. Turns out she more or less felt the same way I did and, in fact, had had my phone # for 7-8 years but thought, guess what, it was too weird to just call. Arggh. When we met, down at a bar in the West Village, it was like we'd seen each other the week before, absolutely just hitting it off and picking things up as though 30 years hadn't intervened. She's an amazing, beautiful individual but I'll say no more lest she happen upon this page and die of embarrassment.

The experience of re-meeting Carol, though, gave me some encouragement about contacting select people on my own. I think the first (aside from, possibly, Marika Lagercrantz, another story for another time) was Rich K. and goes to show how certain assumptions may hold true in one case, not in another. Rich, in some ways, I thought of as a male equivalent to Carol, someone I grew very close to and who seemed, as near as I could reconstruct, likely to be very copasetic to my general outlook. He was a guitarist back then but picked up string bass in order to gain entrance to Oberlin which, at the time, didn't recognize electric guitar as a legit instrument. I recall messing around with his instruments on numerous occasions, once suggesting he try out the bass bow on the guitar. Way before I'd heard of Fred Frith! He'd gone out toward Minnesota back in the late 70s with Matt Spector, last I'd heard, and had been studying architecture. His name, it turns out, is pretty uncommon and googling on it produced listings for a fellow involved in metal stress testing for building projects. Had to be the same guy so I dropped a mail. It was the day Herbie Mann died. Rich, driving to work, heard this news and thought about when he'd played a guitar/flute duet with Cathy Rutgers and thinking of Cathy brought my name into his head (we were an item for a while). Then he gets to work, flips on his PC and sees an e-mail from me. Pretty cool. Sent a note back, apparently very pleased to be so contacted, gives a little summary of his activities and asks what I've been doing for the last 30 years. I, in turn, compose a relatively brief recap of the intervening decades and mail it back. That's the last I hear from him. Hmmm, I think, what's up with that? But, of course, I respect whatever the decision was and decide not to bother him further.

Earlier this year, quite surprisingly to me, I noticed a PM for me at Jazz Corner, checked it out an saw it was from the aforementioned Matt Spector. As it turned out, Matt hadn't been in touch with Rich for about ten years, made contact and Rich forwarded him my note (which he kept it seems...odd). Matt located me at JC. He's in town this week and we hope to get together sometime soon. What may have been the case with Rich and I've found to be, apparently, the case with some other people is that they've settled into one or another kind of middle class life and lifestyle after a youthful flirtation with the arts. When they encounter someone who, to one degree or another, has maintained involvement in art (not that I'm not also resolutely middle class), they get either defensive or shy away, perhaps thinking, "What am I going to talk to him about? My lawn?" It's too bad since, for my part, I'd never make any gross characterizations on that basis; many of my best friends are clueless about the sort of art I'm interested in. So what? But I've seen that reaction a few times...

What prompted this post was the following: One of the people I'd been very much interested in finding out about was Deb P. Deb graduated HS a year before me but, as a transfer student in 1970 or so (from Long Island, iirc) she split her courses between years, including mine. She was a lovely, lovely person, very much (in some ways) the hippie earth mother type. I was fairly smitten with her though we were only friends, she (*sniff*) going out with older guys, I think. I believe I last saw her around '76 and my last information, gathered from who knows where, was that she'd headed out California way to pursue ceramics. Her dad was one of the two most prominent activist ministers in Poughkeepsie (coincidentally--or not?--the other was Cathy's father) and my first job, when I was 16, was doing janitorial work in his church. In fact, the first time I smoked weed was with Deb's older brother Ken on the roof of said church. But I digress. The Parkers were an AFS (American Field Service) family and during my junior year were host to an Ugandan student named Petero Sabune, who I got to know a bit and who later went to Vassar where I'd see him occasionally. "Petero Sabune" is a far easier moniker to google on than "Deborah P" and I'd found (admittedly to my chagrin) that he'd become an Episcopalian minister in the NJ area and was currently the (or, at least, a) chaplain at Sing-Sing. OK, filed that info away as an interesting note. Yesterday, reading the Times on the way to work, I saw an article on a controversy within the Episcopalian Church which, with a vacancy in the area Bishopric, had nominated four people, one of them gay. The paper printed photos of the nominees and, lo and behold, there was Mr. Sabune! Hah, thought I, and naturally enough thought of Deb. Arriving to work, I had the ingenious idea of searching for her Dad who I'd been told (I think by Cathy's Dad a couple years back at her 50th birthday party) was still active. So I googled on "rev richard p" and was rewarded with several likely looking possibilities, including an e-address. Summoning up the courage necessary to initiate such an affront (and I still find it difficult), I sent him a note, explaining myself and asking, if he'd be so kind, to pass on a "hello" to Deb. Well, he did. A few hours later, I received a brief reply from Deb, thrilled and happy to have been so remembered. Waiting to hear further.

Very cool when things work out this way. Very nice when people turn out to still be as wonderful as you remember them