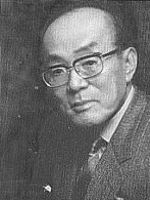 Two weeks, no posts. Just busy, including three nights this past weekend attending variousVision Festival events and generally hanging out 'til all hours with friends into town for the occasion.

Wanted to mention a very fine book by the fellow at the left, Shusaku Endo, "Silence". Endo, a relatively rare Japanese Catholic, writes a novel documenting a Portuguese missionary's travails in Japan in the early 17th century as he and his cohorts attempt to convert the native heathen to the true faith, no easy task. Given his religion, I was extremely impressed at how even-handed he was balancing the beliefs and concerns of the missionaries against the native Japanese. You really had a hard time telling whose side, if any, Endo was on. While I myself, coming into all this with my own prejudices, tended to view the missionaries as just this side of insane, you obtained a real feel for the depth of their belief and conviction that their's was the right path. Of course, you also receive the (more rational) sense that the educated Japanese viewed Christianity as not only so much nonsense but entirely ill-fitting to their culture. However, given the iron-fisted manner which they ruled over the pesant class, one could easily see how they'd be ripe to embrace any belief system that offered a "way out". Beautifully written, beautifully thought out.

For a break of sorts, I picked up William Gibson's "Pattern Recognition"; halfway through and it's proving a fairly involving tech thriller.