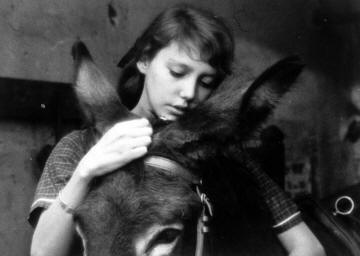 Sometimes I really cringe when I think of the amount of beautiful movies I've never gotten around to seeing. Bad enough, all the wonderful music and amazing books I'll never get to, but somehow cinema seems to be more potentially graspable in terms of numbers. I mean, if only by virtue of what it takes to create a film, there can't be that many around that it's infeasible to actualy view them. Eventually.

When we were on W. 105th St. (1988-2001), we were fortunate enough to have, apparently, one of the best video stores in NYC right up the block. Simply called Movie Place, it placed near the top of the sort of rankings published in rags like New York every year. It was indeed a great place, with an especially rich "foreign" section (I hate the use of the term in this context, segregating non-US/British work like that, the same way it's done in music with "world" music, but...). Being an anal kinda guy, what I did was to simply browse the collection, sorted alphabetically, at least considering every selection, from A to Z. Often, I'd come across something I'd always meant to see, other times, the movie would simply look intriguing and I'd rent it. Saw a ton of fantastic films this way, things I'm sure I never would have gotten around to otherwise. I was never much of one for purchasing videos, however, largely because of their bulk (and subsequent lack of storage space) and also from a non-fondness for tapes as such, going back to a general aversion to cassettes. Come DVDs and I've recently been acquiring a few. I don't know the history of Criterion, if there is one, re: videos, but their DVD collection is pretty amazing and I've used that as a starting point. My first buy was Tarkovsky's "Andrei Rublyev", probably my favorite film ever. My second was a bit more idiosyncratic, Bo Widerberg's "All Things Fair", entirely due to the appearance of Marika Lagercrantz, about whom more some other time. It turned out to be a fine movie anyway.

A few months ago, though, Kim's Video opened a branch here in Jersey City, in the otherwise sterile Newport/Pavonia area--something of a surprising but nonetheless welcome development. They do "odd" things like shelving their discs in order of the director's last name in addition to doing so by title. What a concept! They also carry the Criterion collection. A satisfying combo of anal and randomizing, I've been going down the alpha/title section, choosing films that appeal, for one reason or another. Uzo's "A Story of Floating Weeds" (both versions, 1934 and his own 1959 remake) was first--breathtakingly beautiful. Antonioni's "l'Avventura" came next, also fantastic (and something I bet I wouldn't have fully appreciated 20 years ago). I broke ranks to see Kobayashi's "Harakiri", magnificent. So much great Japanese cinema to see....So, I was batting pretty much 1.000.

Still am. Yesterday, I picked up Bresson's "Au Hasard Balthazar" which I watched this afternoon. Absolutely kicking myself in the ass not only for never having seen this but, to the best of my recollection, never having viewed a Bresson film at all. No excuses. What a gorgeous, deep, wonderful movie! So many lovely scenes, such depth of feeling, such visual beauty. I've grown fond of Donald Ritchie's commentary on these Criterion discs as well--a very perceptive fellow. This one includes an extensive interview with Bresson, done shortly after the film's premiere (along with comments by Godard, Malle and Marguerite Duras, as well as some of the cast) and he's just immensely impressive, clearly a substantial thinker. Need to investigate he and his work more...