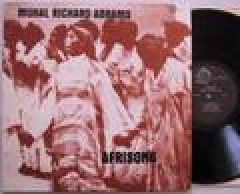 Of all the labels that documented the musicians active on the avant jazz end of the 70s loft scene which have yet to make the transfer from vinyl to disc, India Navigation has to be the one most in need of such. Checking around on Muhal's lovely solo recording, "Afrisong", I could only locate a tiny image of the original cover, which I've fuzzily enlarged here on the left. Apparently, at least this record (possibly others) have in fact been issued on disc in Japan (with different covers) though I've no idea whether they're boots or not. Among other fine items, you have The Revolutionary Ensemble's "Manhattan Cycles", David Murray's first (?) recording, "Flowers for Albert", Leroy Jenkins' solo violin concert (at Washington Square Church, iirc, and I was in attendance) and Anthony Davis' spectacular "Variations in Dream-Time", imho the best thing he ever did, even surpassing the lovely "Episteme". A pity these aren't more readily available.

"Afrisong" is a fine, ingratiating recording, showcasing Muhal's more pastoral, melodic style, not too many degrees removed from Abdullah Ibrahim (still known as Dollar Brand around this time, 1975).