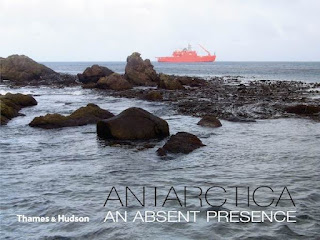 I think I first heard Philip Samartzis' work back in 2002 on his collaboration with Sachiko M, 'Artefact' and have greatly enjoyed his work many times since. A few years ago, in Paris, I was fortunate to hear his work performed at INA-GRM--along with music from Giuseppe Ielasi it stood out markedly from the over-produced, over-synthesized sounds produced by the other festival participants; it sounded real and lived. If I'm not mistaken some of those sources were recorded on the trip documented in this book. In 2010, Samartzis voyaged to Antarctica, recording sounds of the ship as well as the enormous sound-world he discovered on the continent. It's an exceedingly handsome book with tons of photographs (all refreshingly workaday, none shooting for glamor or easy beauty) and texts chronicling his experience, again largely dealing with the day-to-day realities and rigors of living in that part of the world. Two CDs are also included, the first from the boat, the second on land and among icebergs. Each is fascinating, immersive and, like the photos and texts, concerned more about precision and accuracy than effect, very unusual for sound artists plying the field recording trade.

Samartzis, possibly in part due to his residing in Melbourne, doesn't seem to get his due in the US, which is unfortunate as he's one of the more consistent, intelligent and incisive people I'm aware of in the music.