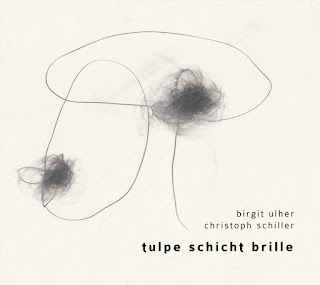 My ongoing, absurd struggle to come to grips with the sound of the harpsichord in all its guises (including the spinet that's Schiller's instrument of choice) continues, but I'm slowly making ground. Here, Schiller (also utilizing electronics and objects) is joined by the fine trumpeter Birgit Ulher who herself adds radio, speaker and objects to her always imaginatively played and manipulated horn (it's their second recording together, I believe, after 2012's 'Kolk' on Another Timbre). The five improvised tracks are sober and investigative, sometimes--given the enhanced brass and the metallic sound of the spinet--evoking vague, mysterious mechanical operations, an imaginary steam-punk contraption. There's a fine feeling of intense focus here, no throwaway moments, as well as a very good balance between response and independence. Often, the listener has the initial impression of an answer to a sound posed by the other, but then the respondee goes off on his/her own tangent, unrelated enough to cause that listener to doubt their first thoughts. And yes, the basic spinet sound is subjugated more than enough to quell any visceral reactions I might have--sometimes the strings are plucked to an astringent guitar-like effect. Ulher's trumpet, as ever, is a fount of unusual sonorities, buzzing, clacking and dripping away but always with precision. Thoughtful, intelligent improvisation of a high order--recommended. 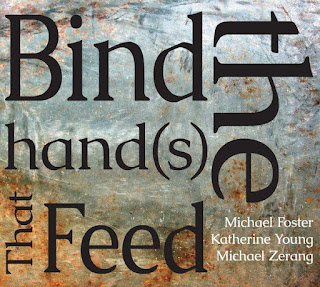 A strong, gutsy set of six improvs from Foster (tenor and soprano saxophones, microphones), Young (bassoon, electronics) and Zerang (drums, percussion) that sits on the edge of free jazz and less idiomatic approaches. It's an interesting contrast to the above-mentioned release. Here, I have the feeling (I could be wrong) that there's a far greater plunging in, an abandoning to the moment rather than careful consideration. Both approaches, and others, are of course entirely valid and if I tend to find the latter mode more generally rewarding these days, there are still plenty of treasures to be found in this strategy. Zerang, to be sure, is an old pro at this and acquits himself quite well. Young is fairly new to me, though I guess I've heard her in other contexts such as the Dropp Ensemble--she's also worked with Braxton. She's very engaging here, encompassing, as near as I can tell given its fine way of melding with adjacent sounds, a vast range on the bassoon, from airiness and delicate rubbing to furious, guttural growls. Foster, who I was fortunate enough to catch in performance a couple months back, has a similarly wide range of attacks, making excellent use of dynamics balanced with extended techniques; Michel Doneda came to mind more than once. The trio searches for a while, almost a given with this approach, but they find wonderfully rough and irregular grooves and concentrated eruptions often enough, areas where the enthusiasm merges with a great sense of drive, to make the journey more than worthwhile. A good, tough outing.

By searching Truck Simulator Ultimate Mod APk I found absolutely unnecessary info about your blog? Why?