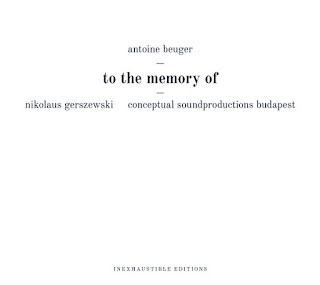 Antoine Beuger - to the memory of (Inexhaustible Editions)

Beuger wrote this piece in 2016 for this ensemble, Conceptual Soundproductions, founded by Nikolaus Gerszewski in Budapest. The score, as described by Gerszewski in his detailed liner notes, simply consists of the terms "sounds", "words" and "silence". Any realization of the piece becomes, obviously, highly dependent on the choices made by the performers involved as well as the largely subjective evaluations of same made by the listener. I'm inevitably reminded of the wonder, if likely apocryphal, story of Morton Feldman who, when conducting a rehearsal of one of his graphic score works, brought things to an abrupt halt and stared angrily at a member of the ensemble (a violist, purportedly) who innocently pointed to the section in play, and said, "But it just says, 'Play three notes.'" To which Feldman replied, "Not those notes."

Here, the ensemble is nine members strong with Gerszewski (piano, objects), Lenke Kovács (vocals), Ferene Getto (vocals, objects), László Németh (trumpet), Dorottya Poór (violin), Nóra Lajkó (guitar), Julien Baillod (guitar, feedback), Andor Erazmus Illés (electronics) and Erik Benjámin Rafael (percussion, objects). In his notes, Gerszewski expresses surprise at finding no indications of "soft" or "very soft" as one might expect from Beuger and queried him about it, receiving the assurance that Beuger "simply did not want to exclude any sounds". Given that, it's up to the listener, should he or she so desire, to determine whether or not the particular realization somehow "succeeds" or not (leaving open the question, also partially broached by Gerszewski--something I've thought about a lot re: many of Manfred Werder's works--whether or not there needed to be a performance at all, much less a recording). To my ears there's something missing, or perhaps too much in play. The "silence" of the score, while of course present, is not on equal footing with the word and other sounds. Put simply, there's not enough of it for me. More to the point, there's too much regularity in the lengths and pacing of the silences. In fact, that's my main problem overall: a general level of uniformity in sequencing and dynamics that strikes me as overly bland, not so much like any carefully observed aspect of life (or a tiny slice of same), too much the sense of a "list". I'd also have to leave open the probability that I'm missing something from my failure to understand the words spoken in Hungarian.

Given this, Gerszewski reports that the composer, upon hearing the recording, said, "I am totally inspired". While I wouldn't go that far, I'm happy enough to have this addition to the ever-growing library of Beuger compositions/realization and if I prefer many of the others, some listeners may find this approach more to their liking. It's fine and, to be sure, evokes the score, just doesn't quite sync up with my own sensibilities. 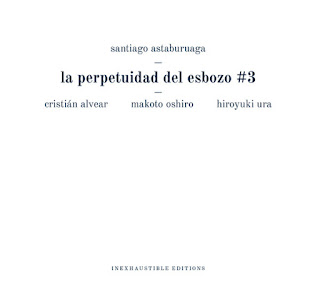 'la perpetuidad del esbozo #3' (2016) is also based on a score that leaves open a wide range of possible realizations, but this one's on an entirely other level. Each of the three musicians here (Cristián Alvear, Makoto Oshiro and Hiroyuki Ura)--the work is written for between two and fourteen performers--wields three sound sources. One is an instrument--guitar, eletromagnetic relays and speakers, and snare drum and cymbals, respectively. The second is a selection of sine tones. The third is a combination of field recordings and archival sounds. For this last, Alvear chose field recordings from Japan and excerpts from Nick Hoffman's 'Bermuda' (which I've not heard), Oshiro opted for sounds from the Hamamatsu Kamoe Art Center and portions of Dawang Yingfan Huang's 'Tourette's Songbook' and Ura went with recordings from Gunma Prefecture and parts of Uchu Hakase's 'Drum Solo at Music.org'.

Ok. These are then deployed over various time sequences. For a recording of 40-minutes, like the one at hand, each musician "elaborates" on 4, 5 or 6 of each kind of sound. There's more but you, perhaps, get the picture. The result is a very unusual and, to say the least, unique mosaic of sound bearing jump-cut and collage characteristics but having, to these ears, an odd and unexpected kind of coherence despite the extremely disparate elements, partially due to the sine tones, I imagine, which while varied, provide something of a unifying factor. Certain sounds recur--there's an orchestral passage that rings a bell but one I can't pinpoint--a movie or TV theme, perhaps--that pokes its head up several times, on organ piece and a goofy-sounding guy (Huang?) who "sings"--seriously annoying in and of itself but as an element in the landscape, strangely appropriate. That can be said of the piece as a whole--I'ver no idea why it works (though, naturally, I suspect the judgment of the musicians involved), but it does. Everything I've heard so far from Astaburuaga has held some large degree of fascination and ungainly beauty; I'm greatly looking forward to hearing more.