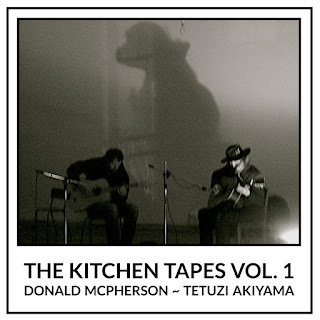 I don't believe I've heard McPherson's work before but I've long since learned to approach anything new from Akiyama with no expectations whatsoever--they're inevitably foiled. [I see they'd released a previous recording, 'Vinegar and Rum', in 2006] What we have here is a set of guitar duets (recorded live in 2010) that teeter on the edge of familiarity--echoes of Fahey and  flamenco--while veering off into all sorts of quasi-related areas. It sounds like there's an agreed to idea in place but the playing of both is refreshingly loose and feels very unconfined, a fine combination of meandering while retaining a general sense of direction. There's also a palpable sense on intimacy and confidence in each other's choice, very well intertwined. All three tracks (they pause at moments during each) are taken at relaxed tempi, the second perhaps the most so, though with probing stabs at points of interest encountered along the way. The "language" isn't unusual at all and will, in addition to the above cited, evoke any number of other musical referents, including that of Akiyama's native country or even Derek bailey at his most fluid and languorous. The last, a rolling, sitar-ish number, is especially charming, pastoral but prickly at once, a lovely way to end a fine, very satisfying set.

god in the music @bandcamp 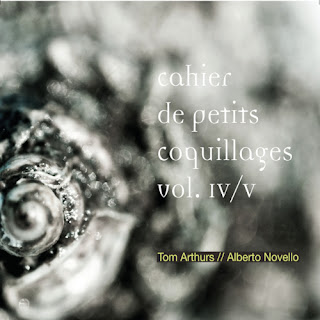 I'd heard a release from Novello a few years back and had written about it , a video/music interaction. Lo and behold, in 2017 he was one of the musicians invited to the annual Art Omi music residency which takes place right down the road from us. So was trumpeter Tom Arthurs, whose music I didn't know but saw that he had worked with a number of improvisers on the London and Berlin scenes, including Eddie Prévost. They were quite an enjoyable couple of fellows and presented some fine music. Turns out they also did some recording while in town and here it is. Arthurs possesses a wonderful tone, very smooth and creamy. On this recording, he flits and writhes between glitchy electronic patterns set up by Novello, often of a repetitive nature but with much ancillary fuzziness and thorny extrusions. Arthurs' often muted horn charts a relatively sober  course through Novello's electronics which tend towards a giddy, loopy and humorous aspect  (here and there, I'm reminded of Dr. Patrick Gleeson, circa 'Sextant'), creating a very enjoyable contrast, sometimes light-hearted, other times poignant. 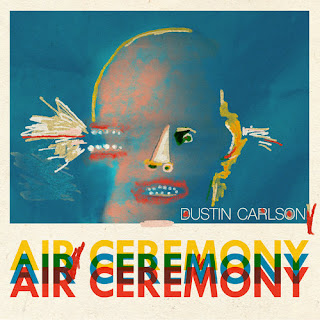 Dustin Carlson - Air Ceremony  (Out of Your Head)

Not my standard fare by any means, but I could easily see a number of readers here digging this. Take late 80s Tim Berne circa 'Fulton St. Maul', combine with the propulsive machines from 'Red'-era King Crimson and leaven with a substantial dose of good old-fashioned free jazz, a pinch of Threadgill and a dash  of thrash and you are in the ballpark. A septet with Carlson (guitar), Nathaniel Morgan (alto saxophone), Eric Trudel (baritone saxophone), Danny Gouker (trumpet), the redoubtable Matt Mitchell (Prophet 6), Adam Hopkins (bass) and Kate Gentile (drums), have a jolly time with the leader's compositions, six pieces that lurch, glide and hurtle through varying time signatures and moods within the space of scant minutes. The guitar solo, 'Watherton', is enjoyably clear and lucid, kind of the 'Peon' of the album (yes, I pick up a little Beefheart, too) but there's a general heaviness of tread that others will enjoy more than I. The band is tight, Carlson's able guitar work tending to lead the way through the juicy throb. This will right up the alley of many.

Out of Your Head's bandcamp page