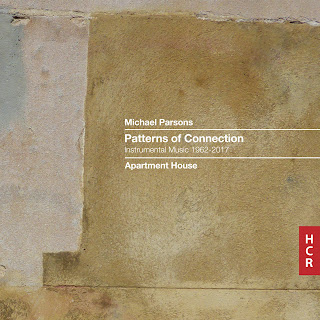 I'd always wanted to hear more of Parsons' music. With Cardew and Skempton, one of the founding members of The Scratch Orchestra, his own pieces were minimally represented on recordings, with only three previously listed at Discogs (I had the split disc--with Cardew--of Tania Chen's readings of his work and recently found the Tilbury; have yet to hear 'Piano Music 1977 - 1996' on Experimental Music Catalogue). This release, two CDs worth, not only spans virtually his entire career (he was born in 1938) but also covers a fascinatingly wide range of approaches as well as instrumentation.

The CDs encompass thirty-nine tracks (including three alternate takes) and aren't assembled in chronological order or, apart from certain groupings, any discernible system, so for a listener like myself who comes in with few prior conceptions of what the music is apt to sound like, it can be a somewhat disorienting experience initially. The very first piece, 'Dispersal' (1999) is a pointillistic work for small ensemble, something of a Webern extension, very soft and digestible, a lovely version of the sort of post-serial construction that's not all too uncommon. However, the next track, 'Rhythmic Canons', composed only a year prior, harkens more to the irregular, interlocking processes explored by composers like Louis Andriessen, though again with great delicacy and beguiling smoothness. 'Percussion and Glissandi' (1999) enters still another territory, softly sliding strings bending around pinpoint wooden block taps. A trio of short piano works performed by the always superb Philip Thomas and dating from 1962 - 1968, return to that post-serial area, though with an elusively lyrical aspect that reminds me somewhat of Christian Wolff. Around this point, we think that perhaps we have Parsons' approach more or less corralled and then 'Highland Variations' (1972) is sprung upon us. The longest track here at almost twelve minutes, it's an astonishing and captivating set of for strings (which do a fair imitation of pipes). Presumably written for reasons similar to those stated at the time by composers like Cardew, Rzewski and others, to shift from more abstruse forms to those derived from folk and worker's music with the intention of making it more accessible to the non-highbrow audience, it's a brilliant set combing drones with repeated melody fragments, unabashedly Romantic and utterly absorbing.

The music continues to expand from there, into the delightful 'Fourths & Fifths' (1990) for solo flute (Nancy Ruffer) consisting of "simple" patterns reminiscent of Tom Johnson, a set of wonderful Bagatelles (as fine as Thomas plays them, I'd love to hear Tilbury's rendition) and much, much more. I'll just mention a few others: the mysterious 'Concertante 1' (2014), a brooding work featuring heavy piano chords over shifting strings and reeds plus occasional surprising explosions of electronics (Kerry Yong), a rare appearance of such here; several more piano pieces from the early oughts, cool and crystalline; a rich, intense and moving work for solo cello, 'Talea 3' (1999), performed by Anton Lukoszevieze; a Skempton-ish solo piano work, 'Variations' (1971); and the final selection, 'Three Tallis Transcriptions' (2003), yet another engaging surprise.

It's just a fantastic collection overall, not only providing a seriously needed compendium of Parsons' music but doing so extraordinarily well by virtue of the talents of Apartment House. Highly recommended. 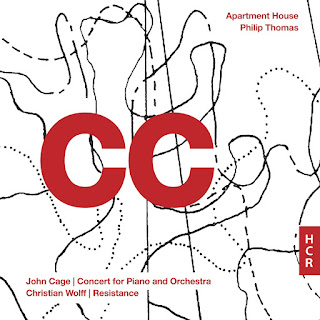 Cage's work, composed in 1957-58 and combining both graphic and conventional notation, has been recorded often enough although, reading the excellent accompanying pair of essays by Martin Iddon and Philip Thomas, one quickly comes to understand the virtually infinite range of realization possibilities the piece affords. Between the decoding and arrangement of parts for the piano, the ensemble and the conductor (who is, apparently, quite capable of foiling any advanced preparations of his musicians), the entire proposition seems as daunting as it is freeing. Perhaps unduly influenced by the graphics included here on the cover and well known as a classic example of the territory, it's very enticing to hear the work as the wandering of the pianist along a series of pathways, through woods, fields and cities; delicate, even whimsical for the most part but rubbing up against enough sharp branches and burs to keep him on his toes. Describing it otherwise might be something of a fool's errand. On the one hand, it "sounds like" any number of post-1950, quasi-aleatory works: sparse for the most part--though there is a section about a half-hour in where the playing, especially the piano, is very dense and convoluted--fragmented, consisting of superficially unrelated sounds, extended technique expositions, etc. On the other, though, as difficult as it is (for me) to quantify, there's a specificity about it, a "Cageness" (or Apartment House-ness) that seems quite unique and immediate. Chalk it up to excellent choices being made, I suppose, to scarce few missteps, to maintaining a thin but pervasive tissue of sound, even in the silences, that allows the music to attain an organic aspect that feels alive, even pulsating. Fine work.

Wolff's 'Resistance' is brand new, commissioned by Apartment House and, among other things, displays the political awareness that has been part and parcel of his work for 50 years; apart from its title, the work incorporates a snatch of one of Cardew's workers' songs ('Revolution Is the Main Trend') and a transcription of Pete Seeger's 'Hold the Line'. The initial impression, after the Cage, is how much more traditionally composed the Wolff piece is. As I find with his music generally, there's a surface comprehensibility that dissolves the closer I listen, becomes watery in its difficulty of being fully grasped. This, I find, is endlessly enchanting. Written for a minimum of eleven instruments 'including at least 1 wind, 1 brass, 1 string, and solo piano', it's fairly lush in color, the contrasting tonalities conveying something of a garden imagery. Brass is more prominent than in the Cage, brief flourishes, burbles and even semi-fanfares emerging here and there. The piece is full of surprising moments; sometimes, it's almost like walking down a hallway and opening doors, hearing what sounds are emanating from within. The general cast of the music becomes more diffuse as it progresses through the middle section, wafting tendril-like, disappearing around corners. Unison lines pop up occasionally, like a short song or march, but quickly give way to less figurative motifs including, some 35 minutes in, a wonderful, slightly sardonic whistling section underlaid by tuba. Nothing lasts very long, however. As we arrive at the Seeger transcription, one has the feeling, perhaps, of disparate troops, citizens, having been organized, brought together from a multitude of locations and trades, cajoled and impelled to form the resistance of the title. A marvelous work and performance and a very strong addition to Wolff's oeuvre.

Alot of the best instrumental ringtone123 you can free download for mobile phone. I downloaded his music at ringtone123 .Top reputable site for downloading music in the US and India. Music here is often shared free. I have heard many of his songs. They were great

Just awesome instrumental Ringtones You can download for your smartphone

Great Work man... If any one want to download ringtone so visit Song Ringtone Download 2020 this site are make your day...

It has been an article that has been described in the best way I have ever read. Thank you admin
Etkileyici Sözler

Thanks, at https://yofonts.com/peppa-pig/ you can find the absolutely free cute baby peppa pig font I came across recently.