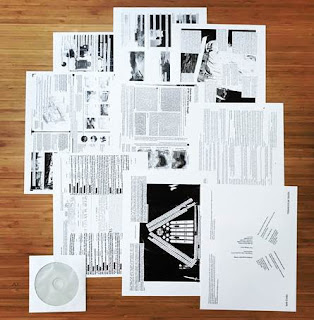 If it hasn't been done already, someone should write an article on Joseph Clayton Mills' label, Suppedaneum. There are seventeen releases now, all of them at the least very interesting, a number of them--like the current item--pretty great. The focus of the label has been on scores and other accompanying material, often given at least equal weight to the audio portion of the release and Cooke's 'Triangular Trade' is no exception.

It arrives with a "title page", more or less, and eight 8 1/2" x 11" laminated pages containing words and images referring to the trade of its title, a system which transported slaves and goods between Europe, the Caribbean and West Africa from the 16th through 19th centuries with repercussions (not to mention extensions) felt and experienced to this day. Bristol, where Cooke resides, was the focal port of the English slave trade and the first page of the release centers the image of a plaque recording the fact, surrounded by related statuary and inscriptions, excerpts of text from London Posse's  'Gangster Chronicle' and apparent news items concerning lack of public funds for Hartcliffe, a very poor section of Bristol. Subsequent pages--they're not numbered and presumably the order doesn't matter--include historical documents revolving around the slave trade, news clippings concerning the legacy of slave trader Edward Colston who seems to still be regarded as an honored father of the city (Colston Hall being, I take it, the main music hall in Bristol), a portion of an article on the effects of climate change in the Fertile Crescent and much more. These are presented in an often fragmentary manner, roughly scissored from printed documents, rarely entire, offering a kind of dizzying picture, perhaps reflecting the confusion and lack of clarity in the thinking of the local citizens about their city's role in their history and, more importantly, the benefits the white citizens have reaped and continue to reap as a result of the slaving practices of their ancestors.

Cooke's sound sources on the disc include field recordings from three points near Pero's Bridge in Bristol (as well as from London and Liverpool docks), Ghanaian shells, djembe-feedback and more including (not that I could pick it up) a bit of Mahavishnu Orchestra's 'Planetary Citizen' "convoluted 184 times". It's one long piece, about 46 minutes, but very wide-ranging. It begins with overlaid harsh, scraping/ringing tones, sometimes buttressed by (apparent) dockside recordings and distorted speech--desolate, sorrowful and keening. This section continues until about 15 minutes in, when the heavens open up in storm and we hear the words of John Newton from his 'Thoughts Upon the African Slave Trade', published in 1788 (not sure of the source here, possibly a television program titled, 'The Fight Against Slavery'). The sounds subside, once again nautical in nature: clanking, echoey metals, churned water. These soon cohere into a relatively pure tone, those echoes still in the background, that subtly pulsates, until an explosion knocks everything apart, a wave overturning a boat, perhaps. The feeling of depth, of largeness is quite strong, Cooke, developing a convincing, if abstract, panorama of not merely a scene, but an expanse of time and history. That complex, sine-like tone returns, more insistent and darker, spiraling and drilling holes in one's eardrums. Very gradually and in harrowing fashion, this tone mutates into a human-sounding cry, a kind of ghostly wail from the bowels of some cavernous depths, a piercing, accusatory call from Bristol's past to the unlistening, willfully ignorant present.

A powerful, grippingly realized work that should be widely considered.