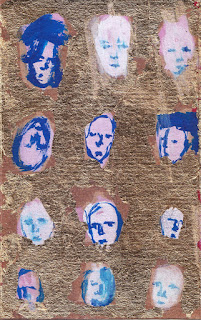 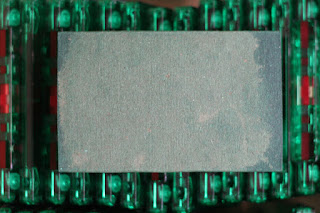 I've been listening to and greatly enjoying Shakhnes' music for close to ten years now I think, both recordings issued under his own name as well as under that of his alter-ego, Mites. One thing that's always struck me is a certain underlying consistency in his general sound-world: continuous sound, highly grainy, sooty and dark, oil mixed with sand late at night reflecting glints of blue and yellow incandescent lighting. But within that world there's also an ongoing expansion as heard on these cassette releases.

'Ghosts' begins with a siren in the near distance and funnels into the kind of low, dirty rumble I've come to expect from Shakhnes, several layers thick, streaming but always varying within its flow. He introduces cyclic elements here though: what sounds like a marble or small plastic ball rotating around the rim of, say, an oil barrel and then some deep groans and thuds as from an ancient, grimy turbine. It's intensely atmospheric, easily transporting the listener to a different place, uncomfortable, possibly dangerous, but endlessly absorbing. Somewhat surprisingly, birds are heard on the second track, 'resilience', over muffled motoric sounds that impart a vague water ambience, as though near a dock, soon overtaken by a more insistent, slightly acidic electric drone. I also pick up a hint of the battered, mangled tapes that Jason Lescalleet used to deal in and, on 'a little fine tuning', the wonderful ghost piano images of Asher's, but in each case a push further on those ideas, again totally beguiling. Conversation heard through many plies of distortion (again, sounding as though from tapes left on the street for several years), obscure ambient rustles and rumbles, birds again, music from next door, a wonderful "musical" loop buried deep and, overall, a fine feeling of simply letting things play out, patiently letting tapes unspool to reveal what's there. Ending back in the street. A fine release.

The two tracks on 'choice ambience' occupy much the same territory, perhaps even derive from some of the same sources. But there's a greater sense of Shakhnes' immediate space, as though recorded from a room that looks out on trees (there are birds) but also overlooks, say, a construction zone with generators humming. At the same time, someone is moving about in the room, creating a small squall of noise therein. A great deal of air and resonance, though fluctuating into more claustrophobic and dreamier areas. Side B, 'let it perish', retains something of that buried melodic loop from 'Ghosts', this time dimly perceived under a wash of sound--I get a feeling of windblown snow though, considering that Shakhnes operates out of Israel, that's probably not very likely. A pulsing, ringing tone dominates for a while as the previously existing environment continues apace, slowly morphing, never calm. As said, I hear something dreamy going on and, again, this wonderful willingness to take one's time, to allow matters to unfurl, accepting what happens to "intrude". Both cassettes are full of excellent, thoughtful and tough-minded music.