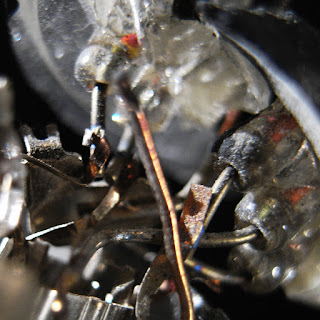 A dystopic essay, "repeated gestures in a decaying factory, empty ritual for a globalized reverie", using field recordings taped in Xinzhuang, Taiwan. Dauby does an excellent job, conjuring up a bleak but endlessly detailed, claustrophobic world, where events materialize subtly, gaining power before you're aware of it it. Nothing is too spectacular, the sounds brewing for a good while, assuming prominence, burning or rotting away. Theres an overtone-rich hum on occasion that sounds like a ghost-choir of Tuvan singers. Gradually, sounds one might normally associate with factories intrude, though murky and ill-defined, as though smothered in wool: repetitive, banging, mutedly clinking. It passes through a more watery phase, equally desolate and beautiful before concluding with a sequence soft ringing tones, bell signals heard through an acidic haze, Exceedingly well-crafted and through out, an excellent, subtly frightening soundscape. 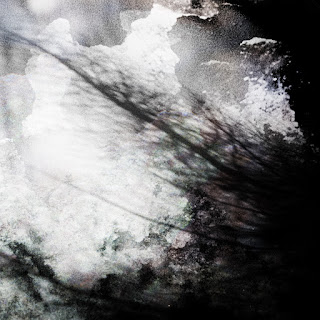 Dauby treads far different territory on this release--two tracks, the first recorded in a lignite mine in Vescagne (inactive), the second on an Alpine mountain, Caïre Archas. "Lignite" is mysterious while also being rather luminous and transparent, bearing a number of surprisingly "musical" sounds, zither-like strums and resonant, warm booms. Clearly composed and, I imagine, processing the field recordings a good bit (I could be wrong), it works very well, calm but with a subtly disturbing undercurrent, as though Dauby is disturbing an area that would rather be left on its own. The second cut is full of air, ice and snow, very much outdoors, with crows cawing, snow crunching, wind flowing...as well as distant engines. The presumably electronically-produced drones add quite a bit of drama to the central section of the work. When they dissipate, leaving behind its echo and a wash of liquids, the effect is somehow very magical. It ends with several minutes of...I'm not sure, except it sounds like someone slogging through heavy, packed snow, deep in a crevice. Both pieces are very strong, really well designed and realized of this type. 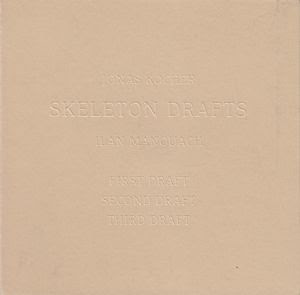 Accordion/saxophone (all soprano, I think) duets existing in that increasingly common tract of improvisation wherein essentially efi attacks--quick flurries of notes, saxophonics that can trace their lineage back to Evan Parker, etc.--manifest in space that allows for substantial silence, the periods of non-playing clearly contributing to the structure of the overall piece. It's an area I often find a bit uncomfortable, somewhat oil and water in that the played sounds don't always strike me as respectful enough, so to speak, of the silence, perhaps overly insistent on their primacy. Kocher, unlike many times I've heard him, plays in a more or less traditional manner (that is, using the keys and buttons of his ax as is normally done) and Manouach (who I don't believe I've heard before) does similarly, venturing into standard extended techniques but nothing too radical. Over three medium length tracks, the playing is concise and able but utilizes a language that doesn't engage me very much, too many vestiges of a kind of free improvisation heard many times before with nothing special added. Not bad, to be sure, no worse than many others but I've heard Kocher in far more interesting and challenging contexts. The blurb on the Bruit site posits a questioning of these approaches; perhaps I'm missing it, but I don't hear so many answers presented. ]]