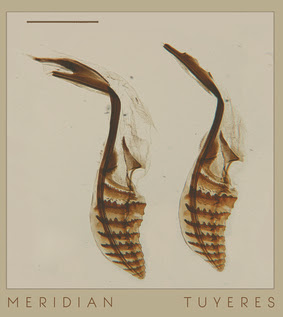 This one is presented me with some problems early on. Meridian is a percussion trio with Tim Feeney, N. Hennies and Greg Stuart, all of whom have provided me with great amounts of aural pleasure in the past. There are three tracks, lasting about 20, 15 and 7 minutes and, although I assume they possess at least a minimum of pre-conceived structure, no compositional credits are given. Also, the second work feeds directly into the third, despite the track differentiation. Even though there are often spaces of (near) silence between sections, on first listen I had the odd impression that a lot of it was improvised; the structure didn't leap out at me. After multiple listens, my guess is that the trio was going for a chaos vs. order dynamic, erecting a framework then (often) filling it in with masses of irregular, thorny and amorphous sounds. I could be wrong. I could also ask but I generally prefer not to. (This subject came up last week speaking with Jürg Frey and we agreed on the preference of simply reacting to what one hears without necessarily--at least for the moment--learning any unprovided details).

If the pieces are, in fact, something on the order of time-bracket works, I suppose the question resolves around the choices made (depending on latitude given) by the musicians. I'll further stick my neck out and guess that there was some degree of intent to go, for lack of a better term, beyond typical Wandelweiser tendencies, that is, to generally eschew the pared-down in deference to the tumultuous and difficult-to-isolate. So, for example, early on in the first track there's a complex rattle (perhaps sticks and other detritus on drum head? but also some watery sounds) alongside a dry, high whistling tone, all presented at substantial volume, linear in a sense but chaotic within that linearity. A severe thwack appears on its own, a drumroll commences. Often a regular component will serve to offset one or more woolier ones. There's an incredible sequence right near the end of the first track, an amazingly complex, off-kilter clatter. These "steps", so to speak, or movements sometimes strike me as borderline random; Curious to discover if any sort of system was involved. At the conclusion of the first piece, I'm left both invigorated by much of the content, a little dissatisfied with the overall form, though I suspect that's due to more to my inability to grasp than anything else. The next piece has a different character, at first playing three very separate rhythmic or quasi-rhythmic figures off one another: a steady tom-tom roll, an insistent dry tap and some slightly askew rim hits (I think). Again, it's unsettling in a way; you expect things to cohere but they refuse to do so, instead lighting out on their own trajectories, until one final *smack* ends that chapter. Broadly speaking, this approach continues in the following section, the individual elements varying, but then it splays out into an all rubbed/bowed area, sounding like a nest of Prévosts, eventually erupting in a squall of shrieks, bangs, harsh, loud rasps and grinding, resistant clicks. It might be great; I have a feeling I'll figure it out in time. Right now, I'm weirdly both baffled and awed. Some of these sounds, plus a bizarrely out of context snare roll, merge into the final track, the music soon melting into a lovely, rubbery thrum (no idea how achieved), the trio coursing through this territory, sounding like rapids, before shuddering to a halt.

I'm pretty much won over, though I'm sure there's more for me to ferret out an appreciate here. Not at all what I would have expected, always a refreshing thing. Do give a listen. 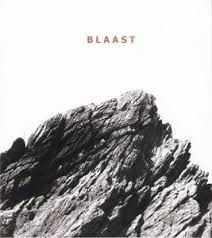 The work is a continuous drone of sorts, complex but essentially tonal. Its path is unbroken. The amplitude fluctuates somewhat but more importantly, the texture and timbre varies a good deal, perhaps charting a course from the more purely synth-sounding to an area more in the organ neck of the woods, again out into the electronic ether, back and forth over its 73 minutes. By the nature of the sounds employed, there's a lot of microtonal activity--portions are reminiscent of Partch's Chromolodeon. I guess Eliane Radigue's electronic works would also be a reference point. Beyond that, it's hard to say too much. It's significant insofar as it is, at least to the extent I know the prior work of Barrière and Costa Monteiro (much less of the former than the latter) such a departure from earlier work. The music is perfectly enjoyable, much fun to up the volume and wallow within. I can imagine experiencing it live and getting reasonably lost. I can't say that, essentially, it stands out from similar work, although one respects the perseverance involved and, I'm guessing, the depth of layering that I may be able to only partially distinguish. It didn't knock me out but it sits reasonably well on its own and, as said, forms an intriguing addition to the canon of each musician. Curious if there's a follow up or expansion. [Checking, I see this soundcloud file, under Barrière's name, titled "Blaast 1", which is in the same ballpark; I assume there's more I've missed.]