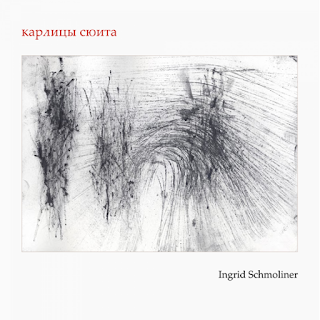 An impressive suite of six pieces for prepared piano, inspired by the legend of Percht, a pagan goddess of the Alpine regions. Four of the six tracks involve propulsive rhythmic work while two are more serene. The preparations she uses seem to be not uncommon--a couple of the pieces remind me of Cages "Dances for Piano", but with more driving force, less gamelan (though that tonality is heard on "grul") and one track, "Бaбa-Яra", is remarkably reminiscent of the main spine from Rzewski's "Winnsboro Cotton Mill Blues"--but Schmoliner has a fine sense of restricted color. I often found myself thinking of strong charcoal drawings with just hints of umber or ocher, something in the Kiefer range. She tends to set a pace, sometimes verging on the relentless (but not overly crowded) then seeds it with these delicate offshoots, dabs of sound that are gone before you know it like enticing images glimpsed from a hurtling train. On "Balaena mysticetus", presumably an homage to whale song, she bows the strings with great sensitivity, summoning wonderful waving moans while on "Teadin", she makes effective use of e-bow. Otherwise, it's full steam ahead, no looking back.

A solid, imaginative and finely performed recording--I'm eager to hear more from Schmoliner. 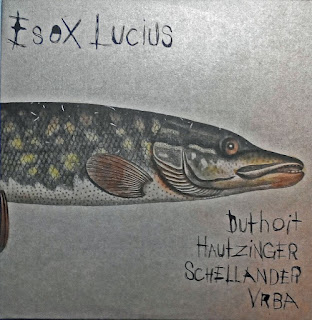 A quartet (Duthoit, clarinet, voice; Hautzinger, quartertone trumpet; Schellander, modular synth; Vrba, trumpet, vibrating speakers) operating on that border between eai and free improv with more of a tendency toward the latter insofar as a relative lack of concern with aspects of silence or the inherent quality of a given sound and more concerned with maintaining a kind of conversational approach. They skirt a more abstract area on sections of pieces like "Check Radio" with its layers of soft static-like sheets and low burbles, clanks and wheezes form the horns but by and large, they adopt a more active, bristling attack, everyone almost always contributing. Even with the synth, one gets the impression of a horn quartet of sorts, which is a rather interesting way to listen. The dynamics remain fairly quiet throughout and the surface is resolutely active and prickly, the synth echoing the sort of goose-bumpy sounds that Hautzinger likes to generate. What they do, they do very well although it's not something that intrigues me so much, more interesting sound creation, less any overall conception of note that I can discern. Mileage, of course, varies. 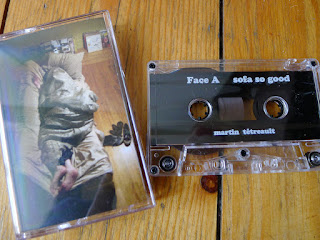 A one-sided cassette release (Side B left open for the listener's own use), reviewed via CDr.

Though I've heard Tétreault's work for a long time, at least since his releases on Ambiance Magnétiques in the mid-90s, I've never followed it very closely, so doubtless have an incomplete notion with regard to the span of his sound. I've tended to think of it as very active, rapid-fire turntabling but I'm guessing that's a mistaken or at least incomplete conception. That said, I've no idea if the sounds heard here are even partially representative of his work, being both long-form and fairly smooth. Vinyl is definitely used though perhaps other electnoics as well, although it's only on occasion that one picks up the telltale clicks and scratches. You're immediately immersed in faded tones that recall fun house or skating rink organs, all warped and hazy, all buried in a morass of subaqueous hum and reverberation. There are some interesting, clipped percussive elements (backwards sounds, I think) that add some grit, some flotsam, but overall it's an attractive kind of murk, if carrying a sarcastic, even silly tone due to the quavering, sonic quality of the organs. Maybe a soupçon of Sun Ra. The music expands and contracts, lurches into a slowly rotating, grinding kind of area about midway through, full of deep washes and thuds, probably my favorite moments. It remains pretty much in pone place, far less frenetic and jittery than most of my previous experience with Tétreault. I don't find it terribly exciting but interesting in that it opened up a new facet of his work for me.