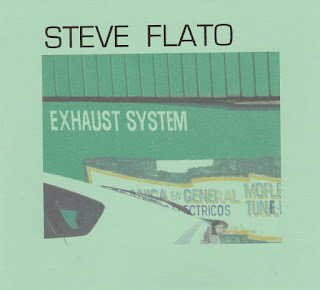 I always find it especially exciting when a musician understands that some previous worked had opened up numerous potential pathways and acts creatively upon this discovery, which is what has occurred here. Using Alvin Lucier's classic, "I Am Sitting in a Room" as a starting point, Flato expands out from some of its basic ideas (not merely imitating certain particulars) and has formed a marvelous, immersive and entirely engaging piece of music.

It's scored for three clarinets, oboe, bassoon, cello, bass and sine waves (all in just intonation), No playing credits seem to be available; if Flato has begun to play all these instruments, it's news to me. Flato's words explain the process well:

In Exhaust System, each instrument is on its own timeline. The process, instead of linearly like Lucier, works backwards, from the middle, going 2x speed, half speed, etc and through different permutations. This creates a counterpoint between the instruments texturally and harmonically. Additionally, all the “swelling” notes played by the instruments was done so through a Reaktor script that randomized when these swelling events would happen. The effect is a shimmering, pulsating wave of sonorities that moves and changes so slowly that you can’t quite perceive any differentiation.


The tonality is deep and rich, those "swells" emerging and receding in a constant, slow flux, the specific interactions and overlappings always shifting. Flato also cites Terry Riley's "Persian Surgery Dervishes" and yes, that feeling is in the air as well. The thickness of the sonic plies varies throughout--dense here, thinner there, and the contrast between acoustic and electronic elements is always in evidence, the latter often providing a wonderful, icy, even alien shimmer to offset the ultra-warm and cozy reeds and strings. It's decidedly a process piece, simply allowed to unfurl, though the randomizing effect keeps one guessing a bit more than, say, the Lucier work, where the listener has a general idea of the direction of the gradual decay. The journey is a joy, endlessly blooming variations on a theme. Quite a surprise from Flato, at least insofar as my knowledge of his earlier work led me to believe, but a very welcome one.