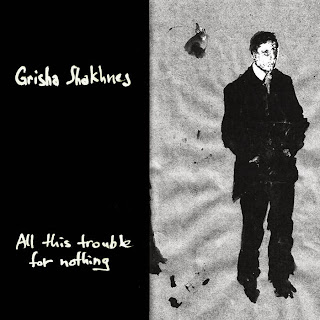 Grisha Shakhnes - All this trouble for nothing (Glistening Examples)

With this release, his second for Glistening Examples, Shakhnes continues to carve out a unique and vigorous shape for his music in these six varied tracks largely composed from, I take it, processed tape sources. "utopia" surges right in with densely layered, chugging sounds, sometimes recalling the massed steps of troops but more a churning mix, as from blades in water. But nothing remains in stasis long here as some buried guitar notes (I think?) are heard followed by an extended alarm bell, a rising tone like an impossibly long vocal intonation, balafon (and an mbira?), deepening churns, thin piano chords, wave after wave, very impressive and deeply immersive. You're somehow not surprised when, toward the end of this 8-minute journey, tablas appear, the scene shifting eastward from Israel (Shakhnes' home base). Nicely programmed, this is followed by more of a steady-state piece, "counterpoint", all traffic rumble and I imagine much more packed in, a great mass of woolliness with interesting forward momentum. "mar. 18, 2015" starts in adjacent territory, with a low, bubbling environment, maybe even molten, but also you can just pick out, at first, some hazy piano, back behind the steam, wonderfully dreamy and uncertain. Muffled ticking (clocks?) emerges, the bubbling beginning to sound more like manhandled, crumpled tapes, the keyboard becoming more apparent but remaining indistinct--a fine, ultra-evocative and troubling track. Shakhnes switches gears abruptly with "hectic light (allemagne-palestine)", the latter presumably referring to he of the cognac and teddy bears as the listener is enveloped in swirls of repeated keyboard figures and drones, rather spacey (though concluding with an intriguing bit of seemingly unrelated and hard-nosed clicks) and unlike anything I've heard before from Shakhnes. I'm not sure I'm entirely convinced but am glad to hear him exploring alternate pathways. "every other summer" plunges back into the inferno, offering a resonant cavern of fire intersected by clear, ringing tones and subtler mid-range ones boring into more distant surfaces. But Shakhnes has yet more up his sleeve as we hear the title cut to close out the album. Bowed strings, perhaps a cello, flutter like large moths in a dusty space, dozens of them. Some scraping relatively high, others trouble low, loose cords, grinding to a slow motion finish. Part of me wants to think it's an actual score for string ensemble, but I doubt it. Insistent, uncomfortable and utterly fantastic.

Shakhnes' oeuvre, including works under the name Mites, has maintained a level of excellence for a number of years now. This one ups the ante even further. Do check it out.