Cathnor, as part of its most recent batch of releases (including that fly thing from my previous post), has issued four CDr albums. 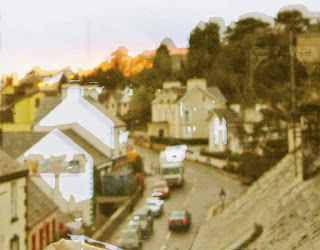 Jack Harris - and neither had either of us seen anything more moving than the layers of a children's birthday cake, baked upon the heath

Apart from sporting the most unwieldy album title of the decade, there's not much information to be gleaned about the sounds herein. They're compiled from field recordings, to be sure (Harris' with contributions from Matthew Webb and Samuel Rodgers) and I take it there's a good deal of interweaving and construction in play. Whatever the case, it's a fantastic amalgamation, one of my favorite releases from recent months. There are several "episodes", separated by an uneasy quiet. On the surfaces, many of the initial soundscapes are banal enough: distant traffic, a bloke attempting to curb his dog, children, etc. but there's always something lurking beneath the crust, a thrum of one kind or another, often barely audible, as though the recordings have taking place above some subterranean power plant. As ever, I'm somewhat baffled by what it is exactly that renders some examples of this field so extraordinarily attractive to these ears, others not. But there's some kind of subtlety in play, a tenuous infiltration of rhythms and, of course, simply the poeticism of the choices made. That thrum bides its sweet time, oozing along beneath unsuspecting vehicles until exploding to the surface around the 45 minute mark, obliterating everything in its surge, the landscape reduced to random pulsations where once there were dogs, birds and children, leaving behind only the odd bump, scrape and ghost voice. 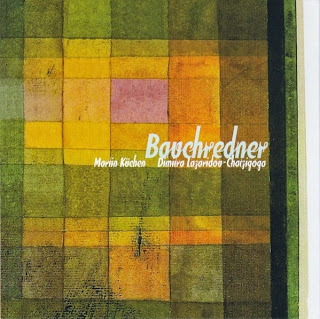 Amusing when doing an image search for the cover, to come across all these shots of ventriloquists...

An intriguing pairing, Küchen's guttural, intense saxophonics combined with Lazaridou-Chatzigoga's rough, extreme zither. Apparently a more literal translation of Bauchredner, per Clive Bell's liner notes, is "one who talks from the belly" which seems apropos. Küchen plays in a more abstract mode than he has on several recent solo releases, fitting more into Lazaridou-Chatzigoga's approach, his output spittle-filled, granular, breathily harsh (though never, thankfully, attempting to hide the fact that it's a saxophone) alongside the zither's varied grindings and hums, often achieved, I think, with motorized devices. The sound combination is excellent throughout and something quite unique to boot, a flavor rarely encountered. The playing is incisive, uncompromising and entirely non-sentimental, filled with long tones that writhe and bristle unpredictably. Good, tough music. 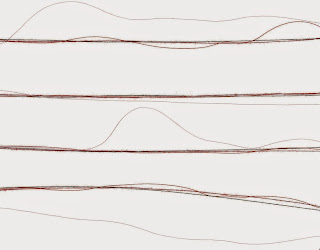 Two versions of a graphic score by Kahn (analog synth, mixing board, radio) with Patrick Farmer (cd players, prepared loudspeakers), Sarah Hughes (zither, piano) and Dominic Lash (double bass). Though no score is included in the release, Kahn sent one on.It's an hour long, divided into five minute segments which themselves have a top and bottom half. Within each player's line, graphic designs appear (if you're familiar with Kahn's cover art over the last coupe of decades, you're in the ballpark), more or less limited by the time segments, lasting from rive to fifteen minutes. Their height varies, something I imagine is normally taken as volume level, although I suppose it could be anything. There are 18 such portions, each bearing a unique pattern. Each player has three or four five-minute sections which are silent, resulting in a series of duos, trios (only one of these, in fact) and quartets. So much for the layout, now to the sounds. They tend to be long, relatively quiet though extending up to medium-loud and on the harsh, dry and abstract side, making the occasional emergence of something like a lone piano not from Hughes all the more striking. The two hours is a great deal to try and take in, the sounds walking a line between contemplation and agitation, the larger forms suggested by the score lending just enough structure to grasp. There are a number of individually wonderful moments and, when one can mentally imbed these within the frame Kahn has devised, one can catch glimmers of a pretty engrossing, challenging work. Recommended and a solid addition to Kahn's sizable oeuvre. 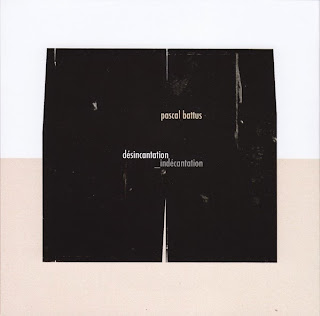 Per the sleeve, Battus uses only "rotating objects" for this set of eight tracks which, at least as far as the number of occasions I've seen him perform in the past two years, represents a fairly small portion of his potential activity. A good thing, in my opinion, as he has a tendency sometimes to range widely through whatever he brings to a concert and I've often found myself wishing he'd concentrate on a particular aspect for longer periods. You can pick up the rotational attributes of the sounds here without much difficulty and, given the abstract nature of the sounds, they provide a certain kind of structural grammar to the pieces, again very welcome. That said, it remains a tough one to crack, Battus' sound coming across as rather thin and brittle (often the case and, no doubt, intentional) offering few handholds much less solace to the ear, sometimes generating whines that carry a mosquito-like irritation factor. I found myself most attracted to the lower key, more fluttery and airier tracks, still tough little kernels but with that buffer zone enveloping the sharp, sizzling electric flashes. A prickly, difficult set to embrace but rewarding more often than not.