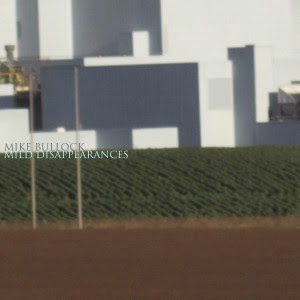 Mike Bullock - Mild Disappearances (Songs from Under the Floorboards)

As fine a bassist as he is, the few times I've heard Bullock dealing with electronics, I've also been very impressed. To some extent, he combines the two here though it's the electronics that are to the fore, though precisely what he's using is not listed and I'd be reluctant to even guess about it. Quasi-basslike sounds filter through the mix seeming to be possibly sourced from some unexpected meeting of bow and resonant wood but, again, who knows? Field recordings are present as well, birds and water sounds well represented. But the unexpected spine of the first track is a ping and descending glissando (again, the later possibly bass-derived?) that form a kind of melodic reference point around which the remainder of the sounds cluster and from which they disperse. It's a nice gambit and if it hangs around a minute or two longer than I might like, it's still refreshing enough to make the piece stand out and infuse it with an unusual richness. Though not nearly so overt, a subtle sense of tonality continues throughout the disc, even when it's fragmented into scattered clawings at the bass or fractured sine tones. Bullock keeps the mix deliciously viscous, balancing the shrill with the rumbling, evoking landscape while remaining abstract (I thought of Kiefer more than once). The last cut brings the bass more into play and is substantially sparser but still manages to retain the earlier depth, just pushing it into a different area, and a really interesting one, dark sounds existing in a large, even darker space. A fine recording--don't miss it. 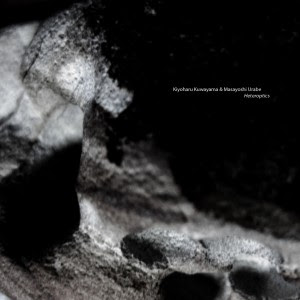 A 2002 date with Kuwayama (cello, viola, percussiona) and Urabe (alto, percussion). For me, it lies on an uncomfortable divide wherein musicians are aware of and attempting to enter into the (then) newish territory of post-AMM improvisation but still retain a good bit of the emotional trappings of post-Ayler jazz. Urabe's playing, indeed, reminds me most of Joe McPhee with a similar balance of abstraction and a deep, almost spiritual color. Somehow, with McPhee I find that a more natural quality; with others, as well as it may be handled, there always seems to be something of a remove. Which isn't to say that the music here doesn't succeed on its own; it's pretty effective, the ghostly alto lamenting over parched string scrapings or the ghostly rattle of metal. There are moments of near-silence but, interestingly, even then, the sounds that appear carry some sentimental weight--curious how that happens. It's soon enough back to the haunted wailing though. There's a moment, some 38 minutes in, when one of the pair appears to toss a large metal pipe or two onto the hard floor with refreshingly raucous results--would that this abandon was followed throughout. As is, while not entirely up this listener's alley, I can easily see this being highly appreciated by, say, fans of Kaoru Abe.