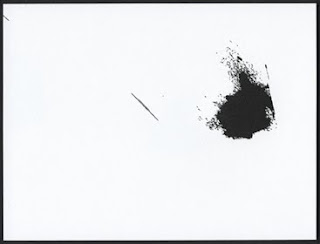 I love hearing field-recording based work that still manages to confound my expectations of the are. It's still fascinating to me why some work and others don't; wish I could pinpoint the whys and wherefores, but maybe not. Ben Owen's collection of four pieces begins with a set of sounds more complex than initially sensed: water, yes, some owl-like hoots (not sure of the source--perhaps the "two pipes" of the title), a pervasive, grainy hum, large but more distant thrums (boat engines?), the sound of heavy wooden furniture being pushed across a resistant floor--it's rich, mysterious and evocative and immediately plunges one into this presumably fictional construct. A very strong sense of place, even if it's difficult to discern the boundaries or to entirely plant one's feet on the ground. With the odd, somewhat violent interruption, the first piece establishes itself and then just sits there, breathing. Very lovely. The brief "walk wind rain", despite its title, is more truculent, the elements buffeting the mic. Again, it's quite rich, thick juicy sounds zooming through the frame, evaporating, replaced by rainwater gurgling through a gutter. Those burbles segue right into "ceiling mid level", where the dynamic level is reduced to a bit more than a simmer but, again, with periodic eruptions. That tension between agitated calm and outright violence explodes again on the final track, "in hull", the soft water drips dispersed by the odd, shuddering moan, as though the hull in question has run up against some unforgiving wood pilings. It's disquieting, uncomfortable.

A very fine recording, issued in an edition of only 50 so, hop to it. 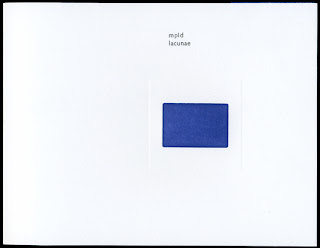 "lacunae" is a DVD release by Gill Arno, operating under the nom, mpld, two tracks, a brief one under 5 minutes and one of 33 minutes duration. The opener establishes the mood and frame: black and white flicker images, initially much more dark than light, allowing the viewer only glimpses of what eventually coheres into a landscape, low-horizoned, with the square silhouette of a building on the left. The sounds are percolations, clicks and a thin whistling whine. As track two commences (seamlessly as far as the sound goes), the image shifts to a brighter, but still flickering one, again a landscape, sea in the foreground, the scene bisected vertically, on a slant, by an artifact of the camera, I think, a thick black wedge, sharp on the left side, blurred on the right. The flicker-image necessarily brought to mind the fine Richard Garet/Asher collaboration, "Melting Ground", though the visuals here are darker, "older" looking. As well, they're still images, though the flicker imparts an odd sense of motion and it takes some amount of discernment to realize that nothing is, in fact, moving. The motor of the boat from which this has been shot (? I presume) gains prominence as does the intensity of the flicker as more light enters the frame. The water journey continues, the scenes slowly changing, the gurgling of the propeller in water surging and subsiding, shifting pitch an timbre. Some 23 minutes in, the dark outline of a man is seen in a still shot, against a craggy shoreline; views of other passengers ensue. At about 28 minutes, there's a startling close-up of a washed-out facial image, mannequin-like, blank. During the waning moments, the soundtrack reduces to a soft burble while the visuals become gently abstract, fold into negatives.

"lacunae" is a haunting, lovely piece, adrift in memories and their sensual associations. Excellent work. 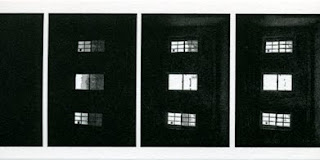 I was also sent this cassette by Andrew Hayleck but, as my only cassette deck sits in my car, I was forced to listen to it whilst traversing the wilds of New Jersey, not the ideal situation (auditorily or olfactorily). I can only say that it sounded pretty good, full of sounds that ranged from the urban street to insectile (it's compiled largely, if not entirely, from field recordings) and that both pieces, lasting about 13 and 11 minutes, flowed along very well, seemingly infested with detail, as near as I could determine amid the sounds of speeding vehicles.