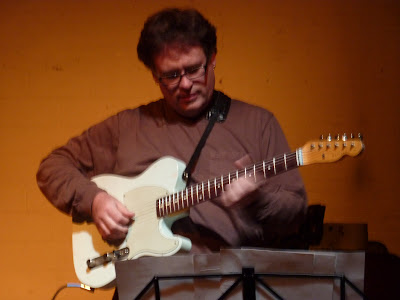 (wondering if we're primed for a Michael Pisaro backlash...)

Well, not from me at any rate. Despite the seeming flood of performances and recordings (more of the latter in the pipeline around here), I remain eager to hear more and have rarely, still, been disappointed.

The first set was occupied by a relatively early piece (1996 or so, I think), called "Appearance (2)" for clarinet and acoustic guitar. Before performing, the musicians had gone through some random-walk exercises to generate the main structural components of the work: the number of sections, the number of iterations of the material during those sections, the length of the silences between the sections and perhaps more. Those "sections" consisted of a soft, held tone (10 seconds) on the clarinet and four single guitar string strikes that occupied about the first five seconds of that tone. This was repeated however many times the newly created score called for and was followed by periods of silence that seemed to range from one to six or so minutes. The pitches changed for each section. That was it, running some 35 minutes. I rather enjoyed it, finding myself visualizing it as akin to lying on one's back in a large open field, gazing up at a cloudless, blue sky, every so often catching sight of a jet flying at 35,000 feet, sometimes off to the side, sometimes directly ahead, sometimes audible, sometimes not. 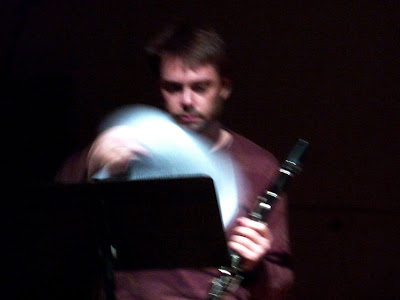 After the break, the pair returned with Just wielding a melodica (an all too rarely glimpsed instrument these days!). He had also hung a mic from the window overlooking 3rd St. For those unaware, Issue Project Room sits in an ex-warehouse on a corner that's not so frequently traveled at night. The music was made up of wonderful, drawn out "breaths" between the melodica and ebow'ed guitar, often in harmonies that (to me) evoked a hymn-like feeling, even with the slightest tinge of gospel. Lusher that I expected. The serendipitous exterior sounds, more often than not, were vehicular noise, tires on road, that had just about the same aural span as those produced by the musicians and, texturally, fit in perfectly. There were a siren and a couple of jets thrown in for good measure. The piece ("e la fora" was the title) was gorgeous, one of my favorite Pisaro manifestations yet, an utterly natural melding of instrumental music and found sound.

For the final work, "Ascending Series (6)", Tucker Dulin joined Chabala who, in turn, broke out the sine waves in addition to the guitar. Barry explained a bit of the score to me and, iirc, it involved numerous retunings on his part, attempting to match those of the sine waves which were largely in just intonation; the necessarily inexact match would, I take it, create interference patterns. Almost throughout, there was a throbbing bottom, electronically generated, often (for a Pisaro piece) somewhat loud, providing a steady weave. Chabala would layer in his guitar, sometimes subtle, others almost piercing, while Dulin periodically commented with low, smooth tones, several seconds in duration, fluctuating in pitch. I take it their entrances, pitches and lengths of stay were prescribed in a typically arcane Pisaresque manner. In any event, the sum effect of the work was of a large, complex, undulating creature, more soft and billowing than not but with sharp bits as well--perhaps an octopus. (!)

A fine evening--no sign of a backlash in these here parts. Can't wait to hear more of Michael's work. 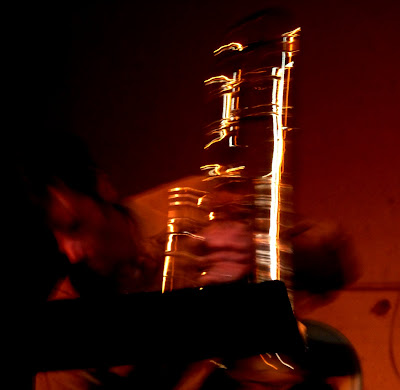 well it turns out anne was out of town for this as well. so, just brian in the audience?

I've really enjoyed the performances of Pisaro's work that I've been fortunate enough to catch so I'm kinda sadfaced to have missed this. I really enjoy the recordings Pisaro has out on Wandelweiser and elsewhere but I feel they emphasize the cool stasis of his approach more than slow dynamic changes that come out in performance (even in a recording like "a wave and waves" which, when turned up appropriately, is a noisy piece of music).

backlash? it'll happen inevitably I guess, but for now I'm OK to sit back and listen, and see how these ideas filter out (see the SEM Ensemble student works concert from this past winter).

There were a couple of others...only about 12? More than enough for a backlash! :-)

billy, i'm not sure i understand exactly what you mean by cool stasis vs. slow dynamic changes but i think you will get a much more complete picture of Michael's music as releases on his own 'Gravity Wave' label start coming out. what performances are you referring to? maybe that might help me understand as well.

Personally Brian, I seem to find the melodica turning up far too often in the performances I've attended. I can think of at least two examples in the last five years...

I'm actually thinking of yr gig @ st mark's this summer...maybe it's just the "live v recorded" presentation - on CD if it's 'too quiet' I can just turn it up (or as i did w "wave and waves" WAY up)...but in a concert setting, the timing and dynamic changes just work for me. not that I think the CDs are worse for it, it's just a difference that I'm hearing.

I can see both Billy and Barry's perspective here. I've seen 5 Pisaro performances in NYC in the past year (the EI one, Fotofono, the two at St. Mark's Church, and this one), and I do think there's something about the live experience that's hard to capture on disc (as is true for quite a bit of ExMus, to use Michael's term). I personally have trouble with the pieces with a sizable component of 'silence' in a live setting, like appearance (2) here or the Beuger piece Dom played at St. Mark's, I'd rather listen to those at home myself.

however, some of Michael's more recent pieces that I've been lucky enough to see live, like 'asleep, street, pipes, tones' at EI and 'Ascending Series (6)' at this show have been really enjoyable live and have shown a side of his work that has yet to appear on record. as Barry alludes to, I think once the second pair of Gravity Wave releases are out in the spring, this live/recording dichotomy may close somewhat. I got to spend some time with 'Close Constellations and a Drum On the Ground' this weekend, and I think it's my favorite recording yet of his, pretty jawdropping stuff.

Really looking forward to hearing discs of some of the newer pieces referred to (especially Close Constellations). Fwiw unlike Jon I generally prefer to hear performances with a lot of silence live more than on disc, because the particular sounds within the silences become active components of the music in a way that they don't quite on recordings (though some performances come with incredibly annoying extras during the 'silences').

Going back to Brian's review (though I know he's in Portugal and so is unlikely to respond), but I was wondering specifically why he felt a Pisaro backlash was coming? I can see that he became fashionable in improv circles quite suddenly a couple of years ago, and the way fashions evolve some kind of backlash might duly follow, but I was wondering if Brian had any particular reason for referring to the possibility. Like most of the posters here I feel ready for lots more exposure to Pisaro's work, but are there signs of restlessness that I haven't picked up on?

not from my perspective simon. i'm not sure what brian's thoughts are here, perhaps a bit tongue in cheek, or could i have possibly done one too many concerts this year?

the live shows and the recordings are absolutely two different things. i don't know how or if something like my solo show that billy references would transfer to a recording. it was designed to be a live show with no thought whatsoever as to a recording, although one does exist. if anyone wants to grab it to have a listen it's here for a little while longer:

Simon, yes, I was joking. Michael's music has (happily) popped up all over the place in the last year +, I just cynically half-expect a contra-reaction to crop up.