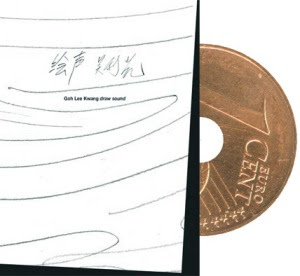 Gotta love a 3", 8 1/2 minute long disc with 98 tracks...or do you? Each cut is roughly equivalent, consisting of the sound of one or more coins being dropped onto what sounds like a smooth, wooden surface--their initial click and subsequent quavering rotations as they settle. It appears as though coins of differing weights and thicknesses are deployed as well as varying patterns of dropping. Humorously enough, track number 89 is performed by one Woody Sullender, though I'd be hard-pressed, admittedly, to differentiate his technique from Kwang's on the other 97. Still, there's something kind of fun about it--who hasn't had some degree of fascination with this very process, both visual and aural? You can even (I suppose) get into it to the degree that you begin to distinguish "good" tosses from ordinary ones. I found myself thinking that the last track indeed culminates with something of a bravura finish!

The disc is accompanied by a handsomely printed booklet containing 30 squiggly pencil drawings, presumably by Kwang. They're very loose and somewhat random within a general kind of form--not such a bad analog to the sound of the coins.

Despite AMM being a virtual wellspring for most of the music we hold dear, it's rare enough (and a good thing too, I guess) that a given recording really recalls that group. This one does, somewhat. I could almost imagine hearing the music contained here on a blindfold test and thinking it might be a Prevost/Gare/Tilbury recording from around the time of "The Nameless Uncarved Block". I'm not at all saying that Poverb is of the same quality, just that it imparts something of a similar feel, with a like appreciation for space, duration and large scale form. Like that era of AMM, where both Prevost and Gare weren't quite beyond an untoward jazzish burst, Heddy Boubaker (alto & bass saxophone) and Mathias Pontevia (horizontal drums [?]) also, once in a while, emit bleats and explosions that might better be withheld. As did Tilbury, pianist and object manipulator Nusch Werchowska often serves as mediator and conciliator, bringing the trio back into more considered realms. Overall, though, its a strong, cohesive performance, carving out the king of spatial block that few trios manage consistently.

Richard posted an excellent, detailed review here that gets to the gist of this very intriguing recording. The sense of structure is indeed quite strong, a suite with certain recurring elements (the held saxophone tones) appearing almost like identical scratches in a set of otherwise obscurely related (if at all) slides. The identical pitches that end and begin each of the eight, 7-minute long tracks serve as bridges or, perhaps less than that, staples or hooks stringing the cuts together as, I suppose, the interior tones do as well, stitching within the frames. The field recordings--a woman calmly speaking in a Slavic tongue; steady state, dense white noise; odd scuffles; crowd noise; silence; automotive driving sounds, possibly in wet conditions; a baroque recording for flute and harpsichord; finally, some sparse, hard clicks (finger snaps?). Eight disparate sonic images then, perhaps "beds" in which to plant the same series of scant seeds, seeing how they mix, how they sound different given their "soil".

There's a fine calmness in play, almost a stateliness, the music moving at a slow, steady pace, allowing the listener ample opportunity to consider each plot.

I enjoyed it a great deal; something ineffable going on there, even something beautiful.

Thank you for the reviews, Brian!

Thank's so much: AMMMMMMMMMMMM (:-O)
I can say like Marcel Duchamp: "TU M' "
Mathias
ps:" horizontal drum" is a my drums set (snare cymbals bass drums...) but the bass drums is like a floor tom: I can play it on the top head and with a reverse pedal, the bottom head.