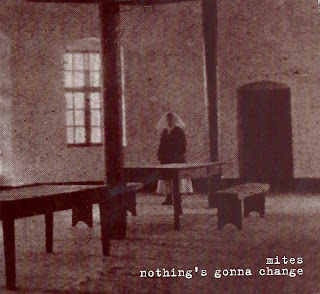 Mites is Grisha Shakhnes an "Nothing's Gonna Change" (dedicated to Derek Bailey, not that one could otherwise tell) is a set of three very rich, very dense tracks that border on noise (the genre) but have car more layers of detail and granularity and far less inherent aggressiveness than I've generally encountered in those climes. "nothing to say" begins quietly enough, but soon attains roar status, some 14 minutes of gravelly, guttural roughage, highly focused, making its way with the inexorability of a mudflow. The second track, "murky", appears to have been constructed largely of field recordings and features a wonderful, low rumble that burbles through hiss, crackles and watery sounding thuds and clunks. Again, the sonic space is fully occupied but the denseness doesn't cloy, the layers managing to maintain their individual character while weaving smoothly with each other. This cut in particular has a fine feeling of surge. The space opens up a bit in "change", a large interior area is suggested, along with automobiles and other less obvious knocks, voices, clanks. Again, there's a really nice forward momentum somehow achieved, almost a hurtling feel. Not sure about the Bailey reference, but "nothing's gonna change" far outshines most field recording-oriented work I've heard this year. Check it out. 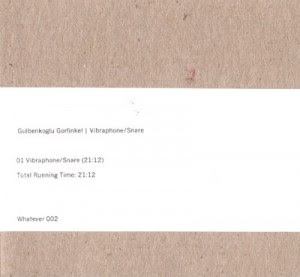 21 minutes (on a 5" disc) of in your face, coruscating whine 'n' clatter; strong medicine. I'm guessing the vibes in question are largely bowed or otherwise rubbed while the snare seems to be attacked in any number of ways. There is something of a form to the piece, the initial onslaught, wherein the screeching jostles with low clatter when both instruments aren't churning full bore, giving way to an area of clearer detail and less volume, though the character of the sound remains harsh throughout. I even pick up a hint of southeast Asian percussion here and there. As in the Mites disc, there's a fullness, one might almost say maximalism at work here, reticence jettisoned in favor pf plunging in the deep end and staying there. A healthy pendulum swing, no doubt, and this one scours the ears quite well.

avant whatever
(also available via erstdist) 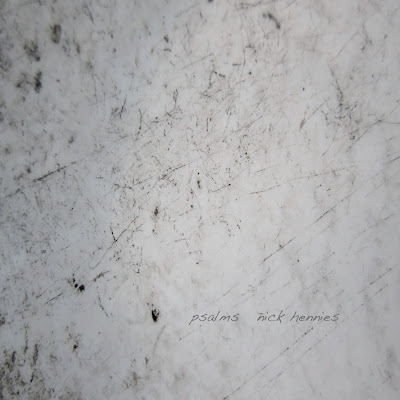 I could be wrong, but I get the impression that Alvin Lucier occupies a kind of sketchy position among the eai crowd, that a good proportion find him overly analytical, his music bearing too much of the whiff of the laboratory. I don't share this view, finding his work almost always fascinating on its own merits (often more than that) and providing a foretaste of certain branches of eai as well. On "Psalms", Hennies continues with his own Lucier obsession and I'm happy he has. The first three works, Psalms 1-3, are for vibes, snare drum and wood block respectively, share the same rapid, steady rhythm, evenly struck, allowing the decay of each stroke to echo, however slightly, to mix in the room. About midway through each piece, if I'm not mistaken, adds a very closely adjacent tone, creating a subtle shimmer (similar to Lucier's combination of sine waves with closely pitched percussion). Each is wonderful, obsession morphing into fascination. Hennies then performs an actual piece of Lucier's, "Silver Streetcar for the Orchestra", for solo triangle. It begins with the same tempo used in the previous pieces; here the variation is accomplished by the handling of the triangle, adjusting the position of the strike, damping the metal, varying the tempo, etc. The resultant swirling tintinnabulations are a joy to hear--perhaps the aural equivalent of cream-in-coffee eddies? He closes with a brief piece for vibes, again in the same general area.

A really enjoyable disc, especially for those of us who crave some, erm, Lucidity.

Thanks, Brian, I'm glad you liked it.

The Bailey dedication is a reference to his Carpal Tunnel CD. These were my first recording with my new set up, and the track titles are pretty much how i feel about the individual tracks (they are presented in chronological order).

looking forward to hear new Hennies just have to go and pick it up ... it is interesting that we have got two performances of 'Silver Streetcar for the Orchestra' released in a short period of time (the other is the one on Old School: Alvin Lucier' disc by Zeitkratzer performed by Mauriece De Martin

just for info, the entire recording is acoustic. the extra tones you hear are all sounds created from the instruments and room sound - pretty cool i think.

Oh, sure, didn't mean to imply that I thought they were electronically enhanced at all.

When heard live, sometimes one experiences these phenomena very much "inside the ear". First time this occurred to me was at a concert of Reich's music at the New England Conservatory in 1974, a piece involving glockenspiels, where I was convinced there were speakers set up in the rear of the hall. Very disorienting. Another memorable event in that regard was Branca's Symphony #2 at St. Marks's Church, where it seemed like there were microscopic angelic choirs nestled in my ears...

This must be the first time you've reviewed three CDs in a post and I have them all! God bless your European sojourn for allowing me to catch up.

Three good ones, too.