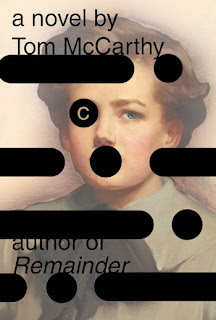 Another brief note, because I mentioned it earlier.

Had great hopes for this after very much enjoying "Remainder", but was rather disappointed. Beautifully written, no doubt, especially in the sense that "historical" novels (which I guess this qualifies as, more or less, in that it documents a few decades about a century ago) often lack--the prose manages to feel both entirely apropos to the period while retaining a contemporary acuity and degree of awareness. In fact, the first third is excellent though, even early on, I had a misgiving or two. You get a fine sense of a family (and culture) on the tip of the technological boom of the era around 1900 in England and McCarthy, subtly, hints at the implications. The second third, during WWI, also works well, but my main misgiving surfaced clearly, namely that the central character, for all his exploits and advancement, was entirely vacant, a cipher as I mentioned before. There's not much to him at all (would that the author hadn't seen fit to kill off his sister--she had potential!). This may be intentional, I've no idea, but as a character, he pales beside the lead in "Remainder" who while also, in a way, quite without depth, was nonetheless fascinating in his neuroses which somehow managed to "fill" him and cause him to seem whole.

The final third really drifts off and has a strong feeling of being tacked on. There's something routine about them (exposing a seance hoax, the Egyptian tomb episodes) and nothing that gives the reader greater understanding of either "C" or the period. It's almost as if McCarthy is seeking to have it both ways--to write a modernist historical novel. A tricky business that, not successfully handled here, imho.
Posted by Brian Olewnick at 10/24/2010 03:49:00 PM