Except next in line on the shelf is The Harmonic Choir's first album, "Hearing Solar Winds" (Ocora, 1983) which I just can't quite bring myself to play. There was a time, I suppose, when the mere fact of overtone singing was enough to engender fascination but that's long since gone and the overtly New Age aspects of this particular recording, at least in my memory, argue against its time on the turntable now.

Oddly, I feel the same, of course for different reasons, with regard to the four Craig Harris albums I own: "Aboriginal Affairs" (India Navigation, 1983), "Tributes" (OTC, @1985), "Shelter" (JMT, 1987) and "Black Out in the Square Root of Soul" (JMT, 1988). I think I first saw/heard Harris with Abdullah Ibrahim, then Don Byron and David Murray, and was pretty floored by his playing, as were most NYC jazz fans in the early 80s. Saw him do a workshop with Benny Powell in East Harlem, as well, around '85. He was a fine sideman in a given context but as a leader/composer, I was never convinced, though I gave him four albums to do so. I pretty much know what's going to appear here were I to put them on and, eh, it will be tedious/sad.

But Lou Harrison, that's another matter!! 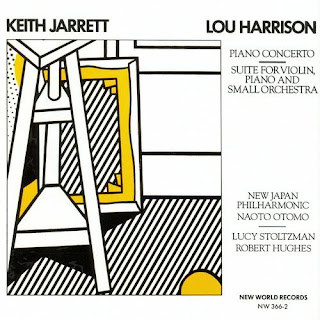 I was long past Jarrett when this appeared, in 1988, but had always meant to listen to more Harrison (still do, in fact; I've been recalcitrant). Two pieces, the Piano Concerto and the Suite for Violin, Piano and Small Orchestra, the former with the New Japan Philharmonic (Naoto Otomo conducting), the latter with a chamber ensemble under the direction of Robert Hughes. I have no basis for comparison, but Jarrett strikes me as doing a good job here. The violin and piano piece is especially beautiful, utilizing very Chinese-sounding harmonies and lovely melodies. My sense is that the recording itself is a little muddy; be curious to hear other versions. 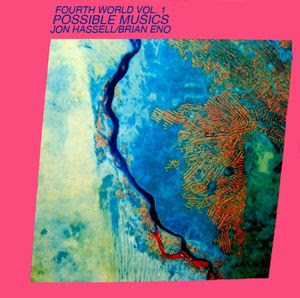 I have a major soft spot for this one. I've heard a bit more Hassell over the years but nothing strikes me as being as strong as this one. (Interesting--Jerome Harris plays bass on one cut, hadn't noticed that before). There are several portions, like that central, three note pulsing riff on "Charm" that resurface all the time in my head. 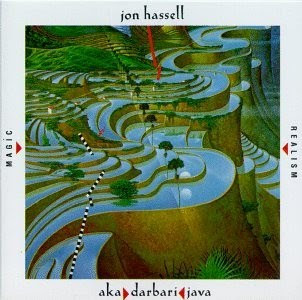 Wonderful cover. Good music too, though not as strong as the prior release, possibly due to the presence of Daniel Lanois?

Not sure how I came across this--Coleman Hawkins, Emmett Buzzy (trumpet), Billy Taylor, Eddie Bert, Jo Jones, Milt Hinton. Recorded in 1954, totally fine. You can hear more than a bit of one of the places Mingus sprang from. Not much more to say...nice stuff.

Have a Mark Helias LP as well, "The Current Set", don't think I can summon the will to hear it.

I got to hang a wee bit w/Hemhill around '85- he played a weird gig here outdoors, sparsely attended, and his drummer toured without a kit. My then friend, drummer Tom Prideaux, loaned him his tubs, putting us all together around the gig. Hemhill was a fantastic musician and sweet guy.
They played Dogon AD.

I like Helias, and I have that album too, so I'll have to pull it out.

Was fortunate to be in the audience in 1989 for the world premiere of Hemphill's "Long Tongues: A Saxophone Opera" at the Warner Theater in DC thanks to District Curators.

So how come Keith Rowe did the cover art to a record from the other Keith :-)

Nice to read that we share a liking of some of Jon Hassell's work, Brian. Perhaps my overall favourite is "Dream Theory In Malaya", do you like that one? Also agree with you on those spectacular Mati Klarwein covers.
Keep up the good work and happy birthday, if one day late!