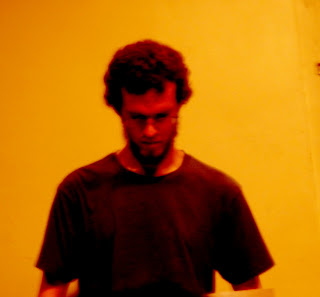 Not that I keep rigorous track of such things, but if asked, "What was the quietest concert you've ever experienced?" I probably would have gone with Sean Meehhan/Toshi Nakamura a few years back at ABCNoRio, and event in fact made somewhat less quiet by the contributions of my intestinal tract, which were salient (I recall Steve Smith's immortal post-concert comment, "I thought this was a duo show not a trio."). All that is by the boards after last evening's performance, however. As an extra bonus, it was also very, very good.

At the same venue as his 6/30 show, a chapel room behind St. Marks Church on 2nd Ave. and 10th St., Barry was joined by Ben Owen and Dominic Lash for the realization of two works by Antoine Beuger, "un lieu pour être deux" and "calme étendue". The room is quite nice with about twelve foot ceilings, perhaps 30 feet square. There are three large windows behind the area where the performers set up; they were open, allowing the sounds of the city ready access. Upstairs, there is apparently a dance studio.

The first pieces was in several (six or seven?) sections, the musicians using slightly differing attacks for each. This was visibly the case with Chabala, who went from ebow to, pick and other means (including rolling something--a marble?--inside the body of his guitar, always very quietly but usually clearly enough heard. The volume with the ebow was actually low enough that the pure tones it generated jostled for prominence with the physical crackles made by its surface being in touch with the guitar strings. It was far more difficult to discern with regard to Owen. Occasionally, I could detect sounds--low hums, mostly--that I was fairly sure derived from his Mac but ore often than not I couldn't swear that the faint sound I was hearing wasn't generated a block away. This was quite lovely. About midway through the performance, denizens of that upstairs dance studio decided they required a large ladder that rested outside the windows. Two of them ambled down the metal staircase outside, fetched the ladder, brought it back up with remarkably little clatter; one soon brought it back down. It was a very delightful swatch of "action" behind Chabala and Owen, a small playlet. The piece took those sic or seven long breaths, each section lasting several minutes, then quietly evanesced.

Lash then took to the front of the room, picked up his double bass and positioned himself in front of a music stand, bearing two sets of scores, two pages each. Holding his bow in his right hand and gripping the neck of the bass with his left, he studied the scores intently, only his eyes moving. You had the sense he was absorbing a good deal of information and deciding what to do with it, which I later found out was more or less the case as Beuger's score requires the performer to make certain decisions before beginning. Lash took some nine to ten minutes to decide. It was rather wonderful; I wasn't quite sure if the performance would, in its entirety, consist of him studying the score. It didn't seem likely, but as the minutes ticked by, I wasn't so sure. Of course, in the meantime, one paid more attention to the ambient sounds of exterior traffic, car horns, talk and, most prominently, the thudding impact of stockinged feet from above, where the dance class had begun in earnest. And in the sort of miracle of serendipity that can happen when you open yourself up to this way of hearing, as we were trying to gauge the goings on, through the window, blurred as though emanating from some distant TV speakers, came that song from Willy Wonka, bearing the lyric, "What you see will defy explanation." Marvelous.

Eventually, Lash took bow to strings for several minutes, though more often than not the resultant sound was virtually inaudible from ten feet away. Otherwise, the merest wisps of sound were heard, short or longer strokes, atonal but not overly harsh. There were silences between these sections, several minutes long; at one point the volume may have risen to ppp. It was all sublimely calm. Even when the school above seemed to be intent on practicing much of the score for "Riverdance", this listener had long since accepted the general environment, content to allow the snippets of arco bass their place in it. Very satisfying.

Talking with Dominic afterward and examining the score, I found out that the piece's minimum length was 45 minutes (which is what we heard) but it could last up to nine hours. Additionally, each bow stroke had several determinants, including aside from duration and pitch, the length of bow allowed to touch the string. So, for example, one portion may have used three inches of bow for ten seconds, playing a given pitch with a certain attack at a specific volume level. Apparently, these bow divisions used golden section ratios.

The "almost-not-thereness", something that, to my ears, can be a slippery thing to achieve, was beautifully present for me. My stomach even cooperated. 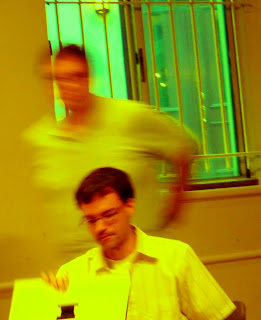 thanks for the very nice review brian! the score to 'un lieu pour être deux' consists of 50 pages with a pair of numbers on each. the numbers range from 0 - 3 and there is a top and bottom number. these numbers represent 'sounds' played per page. the instructions are to decide before hand who plays the top number and who plays the bottom ( we flipped a coin last night ). then the number of, and order of pages is freely decided and the piece is set. both players reading from the page, make the number of sounds required and when they decide the page is finished, the page is turned. for last night's performance we were restricted to roughly 1 hour total so we used a 20 min clock to determine the length of the piece. i chose 10 pages, i think we got through 7 or 8?

oh, and also Antoine states "sounds should be very quiet, not very short to very long."

Brian, what about the Kelley/Wallace/Meehan outdoor set we saw, the West Side one? Sean is a part of a lot of the quietest sets I've seen in NY, and that's the sparsest I can remember.

someone can correct me if I'm wrong, but I thought that the Willy Wonka song ('Pure Imagination') started during Ben and Barry's piece. the volume level (plus the content, as Brian said) fit so well that I really wasn't sure if it was from Ben or not until it showed up again during Dom's piece.

also, again, correct me if I'm wrong, but I thought the version playing had no audible lyrics, but one's brain filled them in if one knew them as the instrumental motif repeated (pretty interesting side effect of the atmosphere the piece set up). the whole thing was reasonably faint, but that was my impression.

"that's the sparsest I can remember."

before the second piece here, I mean, I am right with you on that.

Nicely recollected, Brian, you put those of us 1200 m. away in the seats.

Ben's setup was so great. He was sending 3 channels of audio to 3 small speakers sitting on the table in front of him (one was in an un-covered box). Sometimes i knew what he was doing, and sometimes i didnt - even sitting right next to him. So even i wasn't sure where coming from. Jon, you are right. It played during our set (and i wasnt sure if it was Ben or not!).

Thanks so much for the review, Brian. Just to clear up one possible ambiguity: the performer does have to produce a realisation of the piece, but none of the decision-making happens during the performance (I made all the decisions according to chance processes). In the performance itself everything is determined - so, for example, I knew at the beginning of the performance that I wouldn't make any intentional sounds for nine and a half minutes...

Anyway, thanks again for coming to the gig and the review - and great to meet; hopefully next time we'll get to talk for a little longer!

Thanks for the clarifications, Dom & Barry.

I guess I picked up on the Wonka song a bit later--there were lyrics--at first I assumed it was the version used in the commercial that's been running for a while, which is pretty much where I know it from, anyway, never having seen the movie!

Sounds like it was a special occasion - I guess with music this quiet the 'ambient' sound of the space around has quite an impact on how well things turn out. Brian, how would I go about sending you some CDs for possible review consideration? (I realise you're probably sitting on piles and piles of review copies so more may not be welcome...)

Hah! Hi David--Not ten minutes ago, I came across your blog while looking for a cover image for the Davies/Dorner disc! Nice review!

I can never resist new discs...the address is:

thanks, brian, for your throughtful and sensitive review.
nearly made me feel , as if i had been present at the concert.