Four duos recently released on Another Timbre, each involving a brass instrument. 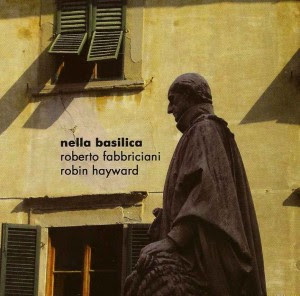 Fabbriciani (bass, contrabass and hyperbass flutes) is a new name to me, someone from whom I hope to hear much more. Here we have five pieces with Robin Hayward and the combination of flutes (albeit low ones) and tuba is delicious. As with most of the music of Hayward's that I've experienced, this is serious stuff but it's never, ever dry. Instead, the setting inside the Basilica di San Domenico in Arezzo imparts a contemplative, even reverent (in a good way!) aura. It's almost all very quiet and, though extended techniques are used by both musicians, the listener hardly notices as it's the music that comes to the forefront. I want to say "European shakuhachi"; there's something of that here. Some ruffles in the air appear on the fourth track, a not unwelcome change of pace, but by and large this is as lovely a recording of paired winds as I've heard in quite some time. Strongly recommended. 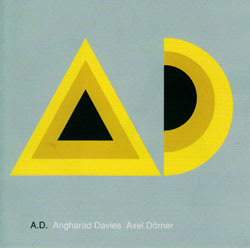 Interesting to compare this one to the above. While both are improvised, "Nella Basilica" has a more considered, thought-out feel; perhaps due to Fabbriciani's history in contemporary music. "A.D." carries, for me, more the sensation of a "standard" (not meant in a demeaning way) eai collaboration, a bit less centered on a given area, more spur of the moment. That doesn't mean better or worse, of course, just intriguingly different when heard side by side. Texturally, it's also raspier, sandier, more plosive. Three pieces, each between 13 and 15 minutes long, quiet with the occasional slightly less quiet interruption, much space, sustained passages mixing with pointillistic ones. Dörner is largely in "breath sounds" mode though not always; similarly Davies lingers on the softly bowed, whether strings or, one suspects, other parts of the violin. While, on the whole, the set is pretty much along the lines of what I would have expected going in and while nothing I heard startled me (in a good way), I enjoyed it pretty well, would have liked to have seen them perform. 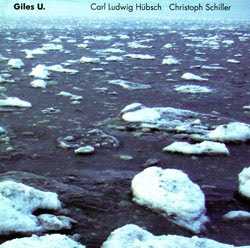 Tuba and spinet, from two musicians new to me [I take that back; Schiller is involved with Millefleurs on Creative Sources, which I'd heard]. I confess to having had only a vague idea exactly what a spinet is. While it can refer to any of several smaller keyboard, it seems to most commonly describe a mini-harpsichord, which is the case here. Not surprisingly, Schiller avails himself of extended techniques, but the tingly nature of the beast yet emerges. When, as on about half the disc, they get more active, the spinet janglier, I lose interest. When the maintain a calmer course, stretching things out, it's fairly attractive music, the unusual combination tickling the ears (Hübsch tending toward the higher reaches of the tuba). Even so, those portions don't really excite me, are only mildly satisfying. I needed more in the way of ideas here. 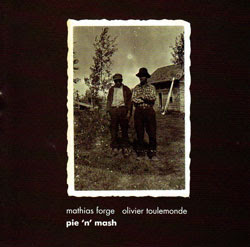 Finally, trombone and "acoustic objects", a single live track, and a very rewarding one. Forge sticks largely to breath tones and other non-trombonely sounds while Toulemonde excites objects in a largely unquantifiable manner, though one guess at some things like rolled marbles. It all works wonderfully. It's interesting, listening to four releases like these that have a certain amount in common, which ones work better (for different reasons) and trying to quantify why this is so. As ever, it comes back to the sensitivity of the musicians involved and how that matches up to the listener's own. In the case of "Pie 'n' Mash", the unusual thing for this listener's proclivities is that the music is at once quite active, even intensely so, yet never feels busy or rushed, as though that particular level of percolation fits perfectly and naturally. It's fairly quiet and not at all strident, which helps. There's also, as I find to be the case with much music in this general area that I end up enjoying, a real sense of air around the sounds, a depth to them, as when Forge's airy blasts whoosh through the aural space, from back to front while Toulemonde's skitterings weave on a diagonal between them. Well, that's the best I can do, anyway. Strong recording.

Had a sneak listen to the Mathias Forge/Olivier Toulemonde - Pie 'n' Mash one at the squidco site. Indeed, very appealing stuff!