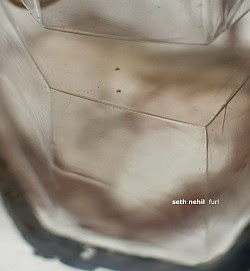 My experience with Nehil's work is, typically, an interestingly rocky one. Often on first blush, I feel at something of a remove, sense a remoteness in it that's slightly off-putting. On subsequent listens, however, mini-worlds appear that are arresting and enticing, even as they're nestled into an environment that gives me pause.

It was much that way with "Furl". The elements that I foregrounded on my initial pass were ones I'm not so keen on, certain post-serial gestures I associate with 60s electronic tape work (the backwards rushing crescendi, a kind of two-step cadence of a falling heavy object--hard to describe that one, but it sticks out--, etc.) and an approach to vocals on one track that leaves me cold. I imagine because I, at least, find a point of reference to composers like Koenig, Riijmaakers, etc. that I find similar highs and lows with Nehil's music. When it clicks, as on "hiss", which is out and out gorgeous, all muted, quavery bell tones emerging from clouds (sometimes downy, other times acidic), everything's well with the world. When, on the following track, "swarm", vocal interjections appear, even as they're embedded in some wonderful, resonant clangs and thwacks, they inevitably carry connotations of archness that give me pause. "whoosh" returns to some fine electro-acoustic sloshing and, well, whooshing, again feeling something like an updating of classic 60s work in the field (the surges, the echoes, the shape of many of the sounds) while the concluding "rattle" is a nest of nettles, dull bangs and harsh whines interspersed with vocalized "bloops", not as satisfying to these ears.

At its best, to these ears, "Furl" is pretty spectacular. I'd rather Nehil not have veered into areas I find less promising but others may consider exactly appropriate. In any case, fans of the aforementioned electro-acoustic music should give this one a go. 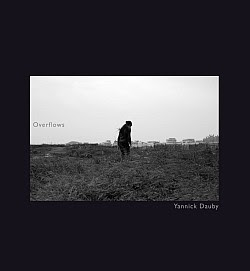 "Overflow" is one piece, apparently consisting entirely of layered field recordings from around Taiwan. It moves from place to place, climate to climate, but has the feel of one great, surging mass of sound. Crowds segue into thunderstorms into motors into different crowds into wind into insects into birds, into silence, multi-plied, texturally rich, amorphous. It's rather a pleasure to immerse oneself in, especially at volume, though after it's over, I didn't feel much in the way of resonance; not too much stuck. Well done, on the one hand, but perhaps lacking the sense of poetr I want to hear in field recording work.