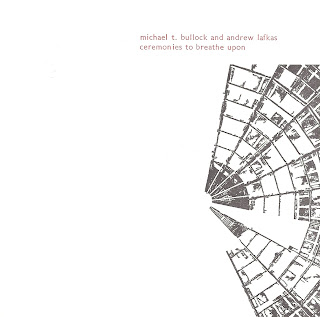 Almost 3/4 of an hour of two basses, played arco, in a large, resonant space. As they say, you had me at hello. The place was the Gassholder Building in Troy, New York, what seems to be a two story octagonal structure with a domed roof and one can only imagine the additional richness that would have been in play were one there to witness the performance, but this disc does a fine job capturing it, and a delightful concert it is. The overwhelming sense I receive is one of restraint, of allowing the room to have its say instead of attempting to fill it. Bullock and Lafkas play at moderate volume but with unfailing delicacy and respect for the space. The pace is always slow and stretched, the sounds straddling the tonal, never getting too comfortable on one side or the other, the textures varied within a spectrum that keeps largely to traditional technique. Little by little, the tones grow deeper, growlier, eventually entering sub-aqueous territory, providing quite a thrilling, even dramatic close as they drift off, exterior sounds entering. Wonderful concert, wish I'd been. 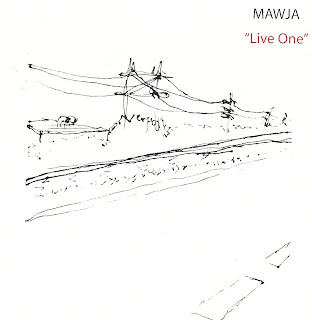 Mawja (Mazen Kerbaj, cornet, objects/Michael Bullock, bass, feedback/Vic Rawlings, cello,surface electronics) released a fine disc on Al Maslakh a while back. This set of two performances from Chicago and Washington DC is also from 2005 and is also quite a good one. Quiet rough and tumble might be one way to describe their music, Bullock doing yeoman's work staffing the lower end of things, keeping it bubbling and booming, Kerbaj on the breathy and softly strident front and Rawlings injecting roughage via plucks and scrapes. Quite active without becoming clogged or over-busy, low-key on the surface but with rambunctiousness to spare, the tracks, once again, are ones I would have loved to be in the room for. Good, intelligent improv.