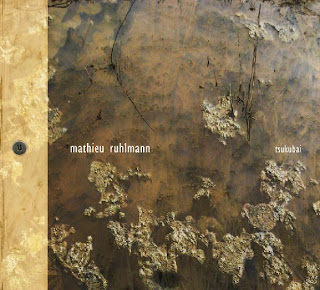 It's often a fascinating, if thorny, problem grappling with a new field recording release, one that doesn't immediately knock my socks off, that is. Very difficult, for me, to quantify whatever my ultimate feeling is about it, why I do or don't particularly enjoy it. "I didn't like the way the water sounded here" or "The wind and clicking sounds were great there." Seems silly. Maybe how transportive it is overall, if indeed that's the originator's intent, which it well might not be. How thoughtful or disruptive to thoughtfulness. Tough generally, more so when the example at hand, over the course of its 35 or so minutes, fluctuates enough between what I hear as routine and wonderfully immersive; shouldn't it fluctuate? Doesn't that more accurately represent a "normal" serious listening experience when as well-intentioned as one might be, the mind inevitably wanders?

Some of the thoughts occasioned on listening to Ruhlmann's "Tsukubai" recorded in the Nitobe Memorial Park in Vancouver, largely (totally?) underneath the surface of water. The water sources are clear from the very beginning and, as such, not quickly absorbing, though there's a hazy background hum that is. The presence of that hum expands for a while, alters into a thinner pattern, disappears. Throughout, there's an ebb and flow of elements (though water is never far away), very calm as would seem appropriate, but with inherently varying levels of interest for this listener. As implied above, though, I'm not sure this is a problem in this context. If it's an accurate representation of the place (given much editing, two years worth of recording etc.), I'd expect my interest to flag here, be piqued there. At the end of the day--or the disc--there's a sense of quiet satisfaction even if the details concerning its genesis have already been clouded over.

My copy arrived with a remix disc, titled "Funayurei" which is a 50-copy pressing and I think already sold out. The same material with more or less Enoesque treatments applied, leavening out the sounds in an attractive, though edge-softening manner. One thing I can say (doubtless with many counterexamples) is that I prefer my field recordings to possess a certain amount of grain, a wide range of textures akin to what one actually experiences when opening one's ears. "Funayurei" is fine for what it is, has a nice inhale/exhale aspect to it, just not enough grit.

(I couldn't locate a cover image for it, but found the same title attached to this wonderful print:) 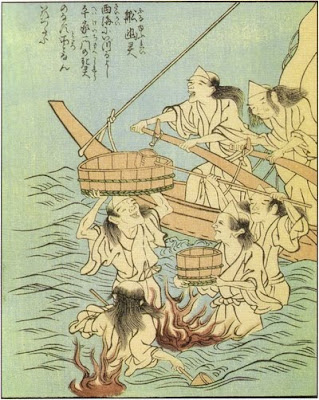 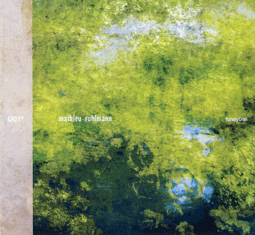 Agreed that's a beautiful print Brian. I wrote about this one today as well. Similar feelings to you, maybe a little harder on the main disc and easier on the second.