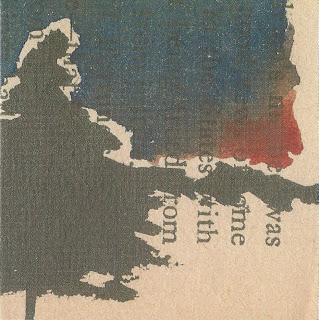 Ok, ok, I admit it--I'm a total sucker for these kind of things. Give me some dense, drone-y electronics (here, despite not saying so on the sleeve, I think with added percussion--there's some of those finger-tapped Tibetan bells in play midway through) and layer in rich, well-chosen field recordings, augmented or not, and you've pretty much got me. The result may not be as transcendent an experience as achieved in more "dangerous" collaborations (see: Rowe & Sachiko) but such efforts, when well-conceived, seem to center in on some juicy area that I find as irresistible as a good piece of fudge. Healthier, probably. Kahn's generally dark hues play off Asher's often innocent and sunny recordings (children playing); it's not the most surprising juxtaposition but it works very well. Shimmering and begrimed at the same time, a fine combination. 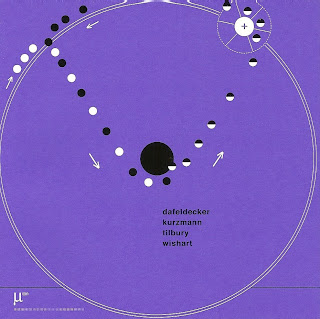 Orange, then green, now violet. Seven tracks recorded live in Vienna and Wels (sounds as though the first four are from one, the latter three from another), this is an enjoyable set though a somehow dissatisfying one. Rich in colors and textures, (Wishart credited on hurdy gurdy but, I assume, also playing violin, the clarinet and bowed bass of Kurzmann and Dafeldecker twining beautifully, Tilbury being Tilbury) the more or less drone-based improvisations are ultimately a little featureless, a bit too much like attractive slabs without much inner structure. Not sure what it is that gnaws at me here, maybe just a sense of too much noodling, albeit with variegated, often tasty pasta. There are a couple of points, oddly enough, especially in the first and last tracks, where I was reminded of early Anthony Davis pieces, specifically his "A Walk Through the Shadow" theme. Not bad, but a bit disappointing given the participants.

Available this side of the pond from erstdist 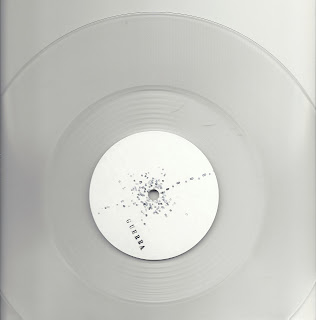 I have several questions. First, let me say this is an excellent recording. Do I know what I'm hearing? Not so much.

OK, it's a 10" lathe cut. I didn't know from lathe cut and still might require some explanation. Apparently, these discs are individually cut from PVC, not vinyl and, so it's been suggested, will erode at a far faster rate, enough that what one hears might vary significantly over time. Is this the case? Cool, if so. A guy in New Zealand by the name of Peter King seems to be the doyen of this area, perhaps responsible for this one. As to the sounds--most recently seen around these here parts as half of Green Blossoms, dispensing pretty, even sugary morsels of whimsical melody, Guerra here is all about icily remote noise. One side--the label doesn't distinguish--is relatively quiet, beginning with grainy, fluctuating tones and much static, as though recorded through wires that a dog's been at. It explodes and finds itself located in a different register, differently textured tones with an insistent, soft click. These eruptions become more frequent, though not too loud, before being abruptly sliced off just before the end of the piece, which concludes in a minute or so of near silence.

While I have no idea of which side is which, the other one sounds as though it just might be a continuation of the "first", picking up immediately in a rambunctious area, quasi-rhythmic static bursts sputtering over a low, turntable-like rumble. It pretty much stays there, a mini-firestorm over that bass threat--really tasty, wonderful stuff, great lack of self-consciousness.

re: asher/kahn - how would you compare this to their earlier disc? i really like that one, but i'm not sure i need another release of the same, if you know what i mean.

Jesse, I don't have and haven't heard the earlier one, sorry.

oops, i just saw your reply. thanks anyway. i highly recommend the earlier one - somehow very subtle and gradually shifting while never boring me. has some great, heavy bass going too.

for me both worked, vista and planes like two sides of the same coin.