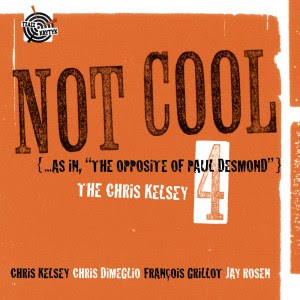 Chris Kelsey - Not Cool {...as in, "The Opposite of Paul Desmond"} (Tzazz Krytyk)

If I remember correctly, Chris and I had a run-in or two on Bagatellen years back, part of the jazz/eai wars of the period. He's an enjoyably cantankerous writer, though, so I was pleasantly surprised when he sent along this release, a recent quartet date with himself on soprano, alto and tenor saxophones, Chris Dimeglio on trumpet, François Grillot on bass and Jay Rosen on drums performing six Kelsey pieces. The titles of some of the tunes might provide an inkling that his orneriness remains front and center: "If Jazz is Dead (Can I Have Its Stuff?", "Sameness is Way Better than Differentness!", "The Past Is a Frightening Prospect". The music, however, is straight-ahead, hard-driving modern jazz though, to my ears, it owes a lot to late 60s Ornette and his colleagues (as well as giving a nod or two to Lacy). The first cut, "Femulate the State" has a lot of the feel of records like "Crisis", a very similar interweaving of parts as well as a certain affinity to Redman's phrasing in Kelsey's tenor work and a whole bunch of Haden in Grillot's bass. It, as most other tracks here, is an extremely solid, accomplished piece, bristling with free jazz energy. Is it my cuppa these days? No. Is it far more rewarding, exacting and imaginative than your standard Viz Fest performance? Absolutely. Good, tough-minded work, recommended for die-hard jazzers like Kelsey (;-))

Kelsey's blog, where you can order 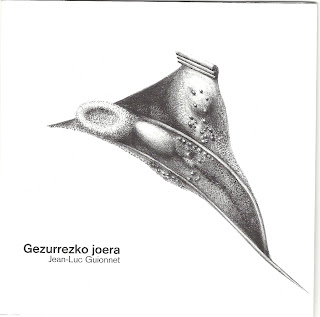 From what I can gather (thanks, Jacques!) the Basque title translates roughly to "Non-Organic Bias". My initial attempt rendered something on the order of "On the Wrong Path", which I kind of like better. What apparently transpired here is that Guionnet went to the church in Bera expecting to encounter a standard church organ, instead finding himself confronted with a small electric one; it's basic sound reminds me very much of those used in the original recording of Reich's "Four Organs". Perhaps all to the good as he constructs a fine, fractured recital, often balancing on the electric interstice between sound and the noise that results barely connecting contacts. It's a serious, even meditative performance with something of a brooding nature, very strong. Guionnet makes references to "standard" church organ playing (enhanced by the room's acoustics which allow for a long decay) but consistently undercuts them, steering them down lanes that lead to noise and disruption; but the historic tinge lingers. Good stuff, perhaps my favorite of those releases of his I've heard.

arteleku (I imagine there are easier places to find this)

The Guionnet disc arrived with a copy of the book, "Noise and Capitalism" which I'm about 3/4 through. Will probably write something later. Interesting essays by Eddie Prevost and Bruce Russell so far.
Posted by Brian Olewnick at 11/21/2009 09:44:00 AM

Chris Kelsey is a hoot!
He could get a thread locked down just like that!

Brian,
the Guionnet CD Basque title should indeed translate as "tendency to lie".