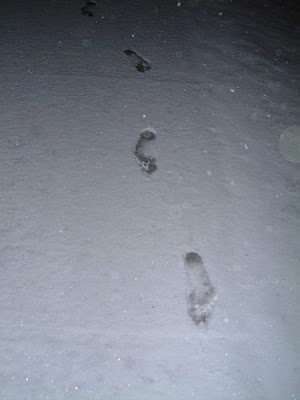 I've always been partial to it. I mean, give me 50◦ on a clear, crisp day or evening and I'm very happy. But given the choice between 90◦ and muggy or 10◦ and raw, I'll take the latter every time. It's gotten "worse" as I've aged, on both ends. Tolerating high heat and humidity becomes more and more of an ordeal while my apparent immunity to the effects of cold has also increased. My winter coat is a short, light jacket, like a windbreaker with a thin lining. I've never zipped it up. I can imagine doing so in an extreme situation but that hasn't happened yet (strong winds, below zero). I don't own a hat, or gloves (that's what pockets are for!) or earmuffs or a scarf. I don't really think twice about it, just go about my business wearing, or not wearing, however much clothing I feel comfortable with.

So, last evening, we're eating at a local bar/restaurant, one that has outdoor seating so that we can bring the puppy along. At the next table, there's a family of three, father, mother, daughter. I recognize the guy from the neighborhood, though I'd never met or spoken to him. As they're leaving he comes over and says, "Excuse me, but I gotta say hello. I was telling my wife that this is the guy who goes around walking his dog in freezing weather in a t-shirt or with his jacket wide open like it's spring." Nice guy, we exchange mildly humorous remarks about imperviousness to cold.

I tell him that, when taking Nanook out for her nighttime pee, which generally involved walking no more than 100 feet up the street, I'd routinely go out with my feet clad as they are around the house, that is, barefoot. I'd only put on footwear if there was snow on the ground. Very bracing when it's around 20◦! Sometimes, though, it will have begun to snow without me realizing it. I'll get to the front door with the dog and think, "Hell with it", and go out sans shoes anyway.

Yes, it's cold, but it's entirely worth it imagining what goes through the mind of the next person to walk down my street, encountering barefoot footprints in the new snow.
Posted by Brian Olewnick at 9/05/2009 08:33:00 AM

Nice post. Do you know "Des pas sur la neige" by Debussy (piano prelude)? Something tells me you'd like it.

No (though I'll try to remedy that) but I've mentioned in the past that were I asked, gun to head, for my favorite piece of music, it might be Satie's 4th Nocturne which, for me, consistently conjures up an evening walk through a light snow.

I'm with you 110% Brian. I hate any kind of heat and revel in the cold. I also agree that walking a dog in the snow is wonderful, moments of sheer pleasure.

I don't own any thick overcoats and often wear just a t-shirt. I don't do the barefoot thing, though not because of temperature... More likely to step on something sharp or into a cowpat round here.