Every so often, browsing through my LPs, I come across a sequence that makes me wonder, "Is there any other collection that contains (say) these four LPs?" This is one such string. 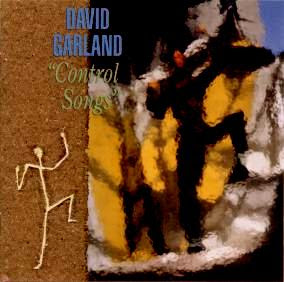 David Garland's first album, if I'm not mistaken [I am, maybe, by two--see site below--not sure of the sequence of LP releases], from 1986, with Mark Abbott (who used to have an electronic music show on KCR that I wish I'd paid more attention to in the late 70s), Klucevsek, Marclay, Zorn and others though it's more often than not solo. The opener, "I Am With You" give a clue as to Garland's fine songwriting and singing capabilities, with some goofy electronified vocals that work surprisingly well, still. It's downtown NYC in '86, after all, so one can expect awful synthesized percussion and, yes, it's here; not really as awful as you might expect, actually. Overall, still sounds good in that unique, hyper-awkward way Garland has with a tune. Singing about i-beam girders, clocks, furniture, Planet X, keeping in touch:

I think I'll probably be
here for you when you need me.
Just give me the word. I'll come right away--
unless, I guess, I'm busy or something.

There's something about Garland I find inherently likable, I admit. I can imagine having grown up with him as a good friend, with similar obsessions. Wish he recorded more. Ah, lookee here, he has a site and apparently an upcoming album.

nota bene: when I saw Fredric Rzewski play at the new Carnegie recital hall a couple of years ago, Garland sat in front of me. He's very tall. It was mildly annoying. 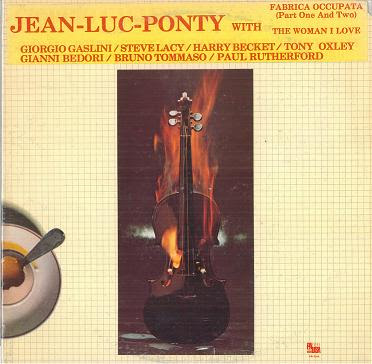 I think I have Gaslini on one other record, a duo with Braxton (and a piece for the IIO, I guess), but I otherwise know next to nothing about him. This is a 1976 release on Pausa with no accompanying info; I imagine I picked it up (apparently in a cutoff bin) intrigued by Ponty being on the same disc as Lacy, Oxley, Rutherford etc. I wrote it up for AMG here and can't add much to that. Not really my cuppa, a little too much on the "classical" side of free jazz, maybe, Cecil without the soul. 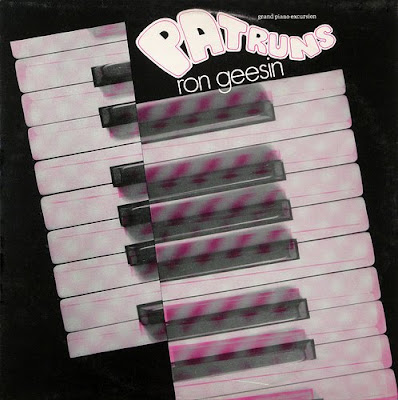 I suppose it's possible, given this LP's seeming obscurity and its creator's involvement with a certain dinosaurean rock group, that this might well be the most monetarily valuable thing in my collection. Maybe not, just checked e-bay and they're showing two, one for $50, one for $130. Whatever, it's a pretty nice set, not at all what you'd expect from someone associated with the Floyd (he co-composed Atom Heart Mother). Interesting bio at AMG.

Fun music, though, piano miniatures mixing Satie with minimalism, sometimes with a childlike simplicity, other times descending in a chaotic storm (though Geesin's always in control--maybe not such a good thing). He attains something like a hyperactive player piano status--incredibly dense but somehow mechanical even as one is, embarrassingly, experiencing a bit of a thrill. In a funny way, imagine the best possible Keith Emerson solo piano album (I know, this is difficult) and you're most of the way there. 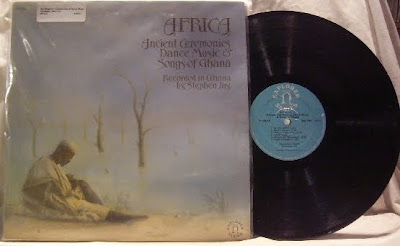 This one has been reissued as "Ghana: Ancient Ceremonies, Songs and Dance Music". My 1979 LP has the dubious generalization, "Africa" followed by "Ancient Ceremonies Dance Music & Songs of Ghana". Whatever, it's a spectacular bunch of disparate tracks, very much in keeping with other great, more widely proclaimed Nonesuch ventures. Instruments like the dzil , a xylophone-like thing with, I imagine, gourd resonators (likely filled with spider webs, imparting that fantastic buzz) are spellbinding to hear. Lot of percussion typical of West Africa, but also treasures like the gonje, which resembles a douss'ngouni but is bowed, here played by Adolphus Micah. Wonderful village choral work as well. The young girl singing "Marilli" is nothing short of incredible. Raw and beautiful.

Too late to listen to the next in the shelves, though Jon Gibson's "Two Solo Pieces" wouldn't likely make those five LPs any more likely to exist in a set elsewhere. Besides, as luck would have it, he immediately precedes my Glass section, a job I have mixed feelings about attempting (listening through, that is).