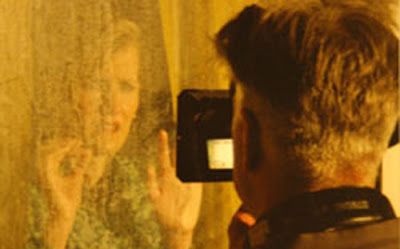 Watched, and enjoyed, Lynch's "Inland Empire" today. Having recalled several analyses of it when it was first released last year, I adopted the well-advised strategy of viewing it as a dream-time sequence from the get-go. Good thing, I'm guessing, as although there are snatches of narrative cohesion here and there (and certainly abundant recurrence of subject matter, totems, themes) it's structured with dream-logic and as such far more beautifully achieved than anything else I've seen in a movie.

Almost all cinematic dream sequences leave me cold if not outright annoyed. I'll go out on a limb and guess that mine are pretty similar to most people's (aside, possibly, from more frequent appearances by Joan Chen). The Surrealist manqué nonsense that passes for dreams in your average flick have nothing to do with the ones I know, much less the overly cohesive, everything working the way it does in life examples. Here, the abrupt shifts feel right, the indistinctness and malleability of many of the environments is well thought out, the quasi-"logical" connections don't make sense but seem like they ought to.

Great soundtrack as well, including a lot of Penderecki which, given that about a quarter of the dialog is in Polish, makes its own sense.

(I was mildly pissed off when, watching the credits, I realized I entirely missed the (I think brief) appearance of Nastassia Kinksi!)

I've been alternating discs from the Shostakovich and Cage sets, a nice contrast. Atlas Eclipticalis seems like it might be an adoptive father of Sugifatti....
Posted by Brian Olewnick at 9/08/2007 02:20:00 PM

I was also going to write about Inland Empire, but for me the film didn’t strike me so much as following the (un-)logic of a dream, so much as a pretty systematic deconstruction of cinematic narrativity—something that a musician might learn from. But more on that when I get to writing that post….

Hi Brian, Thank you for your interest.
I have sent my album last Monday. Have you received it already? I am glad if it has been like that (Warn Me if not, in order that it remedies it please). I hope that you enjoy it and a strong embrace from Spain

PD:Even I did not see the ulktimo film of the gentleman linch

Hi Miguel - Yes, it arrived on Thursday. Will report back after ore listens...

We were supposed to visit Northern Spain, including Galicia, this fall but had to put it off due to the advancing age and frailty of our dog. Hope to do it next year!