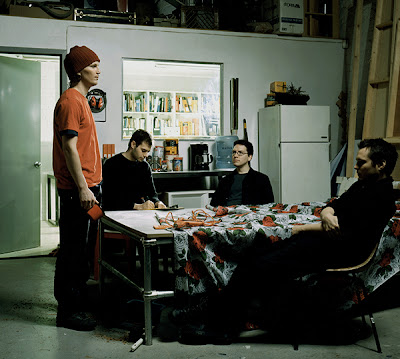 I don't normally do concert plugs here but there's this band Floriculture, who are playing in Brooklyn at the Center for Improvisational Music, 295 Douglass St. between 3rd and 4th Ave. on September 21 (site here), that's well worth checking out. The odd thing, for me, is that the inhabit a general area that I'm not really drawn to these days...but they do it so well, I become fascinated despite myself. That area (at least the two or three times I've seen them live and as represented on disc) could be said to lie somewhere in the Braxton-Lacy-Tristano neck of the woods but with a unique feel that springs from pianist Carl Maguire's complex, often jerkily propulsive compositions.

So even if you're as jaded as I am, take a chance at having your premises shaken.

Huh, I really dig Floriculture (the album), but I'd say that "feel" sounded distinctly influenced by Tim Berne, myself.

Hey Vince, could be. I know you're more into Berne than I am so I couldn't say. I'm only really familiar with his stuff from the mid to late 80s which I never connected with Maguire but, who knows? Maybe Carl can chime in.

yes, Berne's music has had a big influence on mine. His sense of line, rhythm, flow. The first track on the album has some arrangement ideas that I took from him. I handed him a copy years ago, and told him that track was directly influenced by his music. I could list several direct, perhaps blatant, influences on my music, Berne is in the top five or so.

Brian, if you go, say hi to Carl for me.

Hey Mwanji, Alas, I'll be basking on the windswept shores of Montauk from the 19th to the 29th, so will be forced to miss the event.

Good one, Brian. I'm a fan of Floriculture, also.