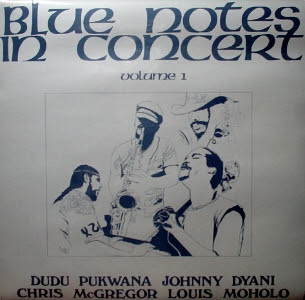 Ah, back to some vinyl for the first time in a while. Does everyone know who the Blue Notes were? You wonder sometime. They never made a large impression in the US, I don't think, you didn't hear them namechecked by the same generation of jazz musicians here with likely exceptions such as Don Cherry. A sextet of South African emigres (originally including tenorist Nick Moyake) escaping apartheid, fleeing to England in the mid 60s, they combined South African highlife and other forms with European free jazz, a somewhat more extreme version of the path chosen by Abdullah Ibrahim. Of the foursome on this date, only one, Moholo, is still alive. The great, great trumpeter Mongezi Feza was already dead as of this 1977 performance.

Pukwana was an amazing player; anyone who never got around to hearing him should try and do so; think a stronger version of Arthur Blythe and you come close. I first heard him in that record shop in Poughkeepsie, walking in one day to hear the wildest, most fantastic music emanating from the house system, only to find out it was his "In the Townships" album on Caroline. More on that one when we get there. He had a rare combination of acidity and joyousness in his playing, ebullient but very bittersweet. As with four other Blue Notes, he died absurdly young. 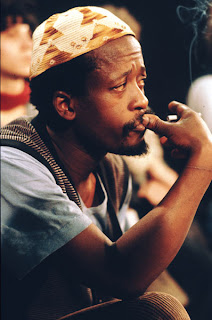 Moholo would, the following year, put together an astonishing midsize band recording, "Spirits Rejoice!" (which was finally issued on disc a couple years back--get it!) though what I've heard from him since then has been fairly routine. McGregor led the pretty well known and regarded large ensemble, The Brotherhood of Breath which, at least on record, I found somewhat inconsistent.

But Dyani. Damn. I'll write more about him, I'm sure, when I get to his batch of records (plus his extraordinarily beautiful album with Abdullah Ibrahim, "Good News from Africa") but what a bassist, what sound and imagination.

This recording sits more on the free jazz side of the fence than the overtly South African-influenced one and I have to say, I generally prefer the latter setting with these guys than the former. Still, it's a rollicking good show if more solo-driven than something like "In the Townships". When they do return to their African basis as at the end of Side One, the effect remains magical.

After Dyani's death in 1986, the remaining trio recorded "Blue Notes for Dyani" the following year (no title image available as best I could search). It's a good record, balancing the j 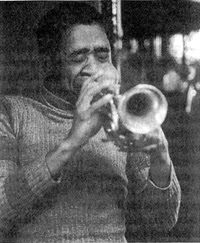 azz and the African to a fair degree, including some fine Dyani compositions. (Dyani's recordings under his own name for Steeplechase in the early part of the decade, especially "Witchdoctor's Son" featuring John Tchicai, are well worthing checking out.) Some really nice playing from McGregor on pieces like the traditional "Ntyilo Ntyilo".

He and Pukwana would die within about a month of each other in 1990. Moholo still plays, performing at the Vision Festival last year (I didn't catch it).

To these ears, Feza, Pukwana and Dyani rank among the best in jazz on their instruments over the last 40 or so years. A shame they remain so little known.
Posted by Brian Olewnick at 4/30/2007 08:05:00 PM

Very good recording, indeed. I got it on mp3 from church number nine (churchnumber9.blogspot.com) without knowing nothing but some little reading I made many years ago about the Brotherhood of Breath and was greatly impressed by it.

Thanks for the record names you dropped around this one, I'm gonna hunt them!

To condense, the albums that include these musicians which I'd really go out of my way to hunt down are:

Pukwana's "Diamond Express", originally on Arista, has some good stuff as well. The second Ibrahim/Dyani collaboration is OK, but nowhere near the first.

Brian, Moholo is playing this year at the Vision! He didn't play there last year. So you'll still have a chance to catch him live.

I don't think Moholo has been the same since his stroke. I've personally cut down my collection in this area to 'In The Townships', that's a great one.

Whoops, thanks for the correction Gerardo.

What I've heard from him in his Viva La Black incarnation hasn't been too good, actually. But who knows, if I'm at the Fest on the right night (if I'm there at all, still undecided, probably depending who comes into town....)

Oh man I'd love to come back to NYC and catch the Vision again (good program this year; the Grimes/Crispell duo, the McPhee/Lonberg-Holm/Zerang Trio, Moholo, Ganelin, Bern Nix, Zingaro). But I'm very nervous about my job situation, because the governor is changing in July 1st, and since I work for a legal aid office for the governor, the new governor may very well decide that he's no longer keeping us. So I don't think I'll have a chance to take a week off.

What loooks much more possible for me is to go to Houston for a weekend for the Rowe gig at the Rothko Chapel, and next day Sachiko/Sean Meehan. I actually need to go to Monterrey on some business activity, so I can ask for an extra day so I can make those concerts. Any chance you're coming for those? Jon said he already has his airplane tickets for it...

Nah, can't swing that one. Already going out Seattle-way in June for a family affair.

You're coming to the PNW Brian? You get some free time I'll buy you a beer! Let me know if you want any info on local amenities.

Thanks, Robert. It's gonna be tight but I'll mail you ahead of time when I know more exactly. Most of the weekend will be spent out at my cousin's place in Mazama which is mid-state, some 100 miles south of the Canadian border, I think. Kinda in the middle of nowhere.

B, you made reference to 'south african highlife'. While I assume Highlife did reach South Africa, was it really a prominent genre there? I tend to associate it more with West Africa (Nigeria, Ghana) mainly, of course, because of Fela and that it lead directly to Afrobeat.

Btw, 'Witchdoctor's Son' is definitely tops, but imo all of Dyani's Steeplechase releases are worth picking up.

Sergio, you're probably correct --I might be confusing the term with kwela and such. I seem to remember hearing "highlife" used with regard to South African music, but obviously it's predominantly a West African genre. Just chalk it up to premature senility.

And yeah, I agree that all the Dyani albums under his own name are well worth hearing.

Your comments on Dyani and Abdullah Ibrahim chime with my feelings.

I met AI in Sydney, Australia in about 1974. He was devastatingly brilliant, an intellectual as much as a musician. Fond of dispelling jazz mythology: "I do not improvise, I compose;" "I recorded with Elvin Jones, he only plays in 4/4". No accidents even at his most adventurous.

I am trying to find a kind of sax-driven township music we listened to in the '80s, I recall it was called Zonk, maybe Mahone Zonk. Can you help run that down?

No, I'm afraid I never kept up with South African jazz after Ibrahim (and even then, pretty much only with those musicians associated with him). It's something I should look into, though; if I do, I'll post up at the top of the blog.

I've posted a recording of a solo concert by Abdullah Ibrahim here: