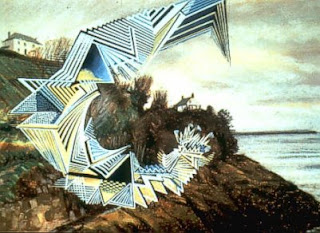 For the last few years, every so often, I've experienced a strange and unsettling visual phenomenon. Suddenly, without an apparent ulterior stimulus (like excessive exertion or rapidly standing), an arc of shimmering lights would appear, usually on the periphery of my visual field but generally taking up enough "space" so as to obscure my vision somewhat, making reading, for example, difficult or impossible. The arc is prismatic in coloration, reds, yellows and blues predominating. The colors are in a zigzag pattern, reminding me of nothing so much as (some of you oldsters may recall) that illustration of a cat done under the influence of LSD that was used to document effects on the brain of the drug in science journals of the 60s, which image I can't immediately locate on the web. Often, it would begin as a relatively small kernel, slowly expanding to a pincer-like, thin slice of bright colors.

No pain was associated with this event and it would gradually disappear after about 15 minutes. They tended to happen in clumps, one a day for 3-4 days, then nothing for a few months. Although the image was usually more on one side than the other, it appeared in both eyes as well as when my eyes were shut, overlapping the normal phosphenes, so I knew it wasn't specifically eyeball-related, but was emanating from deep enough in the skull at least where the optic nerves met. Nonetheless, it was a bit troubling. I rather like the sense of sight and was worried these events might be symptomatic of other issues that could develop further. Aggravatingly, googling around on "visual problems", "prismatic", etc. didn't yield anything that I could ascribe to what I was undergoing.

Until this morning. I had an episode on the way to work, did some extra diligent googling upon arrival and, happily, found the damn thing: Ophthalmic Migraine. Migraine sufferers are apparently familiar with this as a symptom of an onset of an attack, which occurs when small blood vessels behind the eyes go into spasms. However, there are many people, yours truly included thank goodness, who experience the visual symptoms but no pain. It should just continue to be the nuisance it is now. The image above is a representation of what it looks like, though my patterns are thinner, more luminous and with much more red and golden yellow. Anyway, nice to put a name on the thing.

btw, sometime, I'll have to write about phosphene imagery. Not that I know anything about it, but I've always been fascinated by it, curious about the "realistic" images we tend to create out of those patterns as well as wondering about the demarcation between actual retinal images and one's imagination, a line which strikes me as blurred.

Reading: (when not blinded by prismatic arcs)

Frederic Jameson - The Seeds of Time
John Banville - The Sea

on deck (getting to 2005 Man Booker Prize winners and nominees, obviously...)

Zadie Smith - On Beauty
Umberto Eco - The Mysterious Flame of Queen Loana
Douglas Hofstadter - I Am A Strange Loop (though after his NYT Magazine 20 Questions page this past week, I'm less sanguine)
Posted by Brian Olewnick at 4/05/2007 12:10:00 PM

Do you normally read through the Man Booker list? I have to admit I find that a pretty strange impulse, but I still find no lack of great things to read so perhaps I just don't need to.

Anyway the The Mysterious Flame of Queen Loana is a great read IMO. Not top three Eco perhaps but a really enjoyable and with some great insights into early 40s Italian pop culture. The Hofstader just shipped to me today and while my passion for cognitive science isn't what it once was (you could argue that's what my degrees are in) I always enjoy his books. Hope it's up to the usual standards.

No, not at all (the Man Bookers). But I'd had the Banville in my paws a few times before. The other day I wandered down to the Border's that's near my job. They had a "3 for 2" (buy two, get a third free)table which, surprisingly, had a bunch of good stuff lying atop it, the Banville, Smith & Eco books included. Enough to get me to pull the trigger.

When I've read Booker nominees before, maybe I've found a 50% enjoyability rate, but some of those are things I likely would never have heard of otherwise, so I find it at least worth a shot. I've been looking for another from last year (I think), Kate Grenville's "The Secret River" but have yet to stumble across it.

I'm getting the impression Hofstadter's less concerned with cognitive science these days than identity and, erm, "soul" issues. Maybe stemming from a severe reaction to his wife's early death back in '93 (?). We'll see.