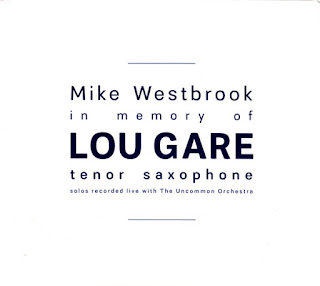 Lou Gare died last fall at the age of 78. He, along with Keith Rowe, Eddie Prévost and Lawrence Sheaff, were founding members of the improvising ensemble AMM in 1965. Prior to that,  Gare, Rowe and Sheaff were also members of Mike Westbrook's group, Rowe since about 1958. This ensemble usually had between eight and eleven members (including John Surman, Mike Osborne and others) and,  in the context of British jazz of the time, was fairly forward-looking, Westbrook being quite partial to the denser, more complex arrangements of Ellington, Basie and Mingus as well as encouraging the musicians in his band to experiment with their own incorporations of newer music as well as that from non-Western influences. Unlike other AMM members, Gare never quite lost his attachment to jazz, particularly to the work of Sonny Rollins, Paul Gonsalves and others, forming a free jazz-ish duo with Prévost after AMM's initial split in 1972 and subsequent recordings of his own.

This disc selects performances by Westbrook's Uncommon Orchestra from 2010-2015 that featured Gare's tenor playing, sometimes complete tracks, sometimes excerpts. 'D.T.T.M.', Westbrook's lovely and moody homage to Ellington, opens with an unaccompanied solo by Gare and it's gorgeous--burred, warm, unhurried and bubbling with ideas, essentially soloing for the entirety of the track's twelve minutes; a superb performance. There's a fragment of Gare sparring with poetics from Marcus Vergette, several of him riding atop the ensemble, an excerpt from Westbrook/Rossini, improvising "his own overture to the Overture to The Barber of Seville' and much more. I especially enjoyed the two Strayhorn pieces, 'Johnny Come Lately' on which Gare stretches and pulls over some delightful arrangements from Westbrook and 'Lush Life', featuring Gare on his own, carving, once again, an extraordinarily inventive set of variations on the theme, never falling into cliché, remaining true to the source while ushering it just a bit outside its comfort zone. A second take on 'D.T.T.M.' ensues, every bit as enjoyable as the first before the disc closes with an extract from an early (1979) composition of Westbrook's, 'Graffiti', in which Gare's liquid phrasing heats up and begins to sizzle over some delightfully punchy band arrangements, recalling, to me, something of Sam Rivers.

A fine collection, ably showcasing Gare in this context. Required listening for AMM completists and simply a robust, throughly satisfying musical experience on its own merits. 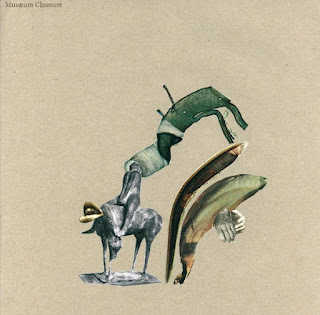 This arcanely named trio (Wiki article on the source here) consists of Louis Laurain on cornet, Hannes Lingens on drums and Sébastian Beliah on bass. Laurain and Lingens were (are?) members of the intriguing ensemble, Die Hochstapler, which took compositions by Anthony Braxton and Ornette Coleman, rendering them with both astonishing precision and imaginative expansiveness. Here, the reference point seems to be Bill Dixon.

Three tracks. The first, 'A la ventura part 1 & 2', is a sprawling, pleasantly meandering piece, I assume an improvisation, with Laurain's burnished, almost woody-sounding cornet tracing considered and discursive paths over Beliah's gently probing bass and Lingens' brushes. There's an implied structure, but a loose, breathing one, fabric-like, that allows for a seemingly wide range of options. Laurain chooses an area then mines it, leaving much untouched but always locating value. 'Rarities in Pictures: a large submarine landscape/a night piece' begins with the bass leading the way, very forthright and blunt, reminding me a little of Ronnie Boykins with Sun Ra, Lingens switching to sticks on toms, the pair pushing . the music forward, leaving space in the furrows for Laurain to quietly investigate. The second half of the 20-minute track returns partially to the area explored in the first cut, but with a more regular, insistent bass, limning a firm line from which to drape the cornet explorations, lines iterated and expanded on by the drums toward the work's conclusion. 'Remarquable [sic] Books' kind of skirts the area between these two approaches. It's fine, but for me didn't add to much to what had already been presented; I think the album would have been served better by just the two first performances.

As is, Musæum Clausum is a strong, flowing and enjoyable disc, well worth checking out, especially by those unfamiliar with these musicians. I'm curious to hear what comes next