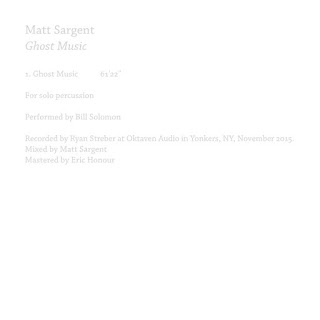 'Ghost Music' is a work for solo percussion, lasting about an hour, performed by Bill Solomon. Though not listed on the release or elsewhere that I could find, for the first half of the work, Solomon is playing an instrument that gives forth high, metallic sounds--I take it a celesta or glockenspiel, something in that family. It's largely struck (with what sounds like thin rods or sticks) but there's also sustained tones that sometimes sound bowed.

That first 30-odd minutes is comprised of sets of struck tones, often in small groups, with patterns like 3-3-5-5 or 2-2-6-5, later in short melodic sequences. I've no idea whether it's score or intuitive. The tonality at the start reminds me very much of that used  by Karl Berger (on vibes) on Don Cherry's 'Eternal Rhythm', which I believe was based on Balinese or Javanese intervals. Whatever, it's dreamlike, unearthly and gorgeous, the tones themselves silvery and ephemeral, their lingering hums...well, ghostly. There's something of a Feldmanesque irregularity in play, patterns that seem to form only to dissolve before apprehension. I also get a time-stretch effect; I think I've been listening an hour and it's only 20 minutes. This is a good thing.

About halfway through the work the sound-world shifts rather abruptly, announced by a steady rhythm of slightly deeper-pitched metals augmented by the odd single strike. Whereas earlier, the arrangement of patterns occupied a reasonably defined area, Sargent (or Solomon? not sure how much, if any, leeway is provided) now presents multiple episodes of varied approaches and attacks, often using metals of a less precisely defined pitch, perhaps bells of different types. There's more open space, more tone range, many different attacks in general, though everything remains embedded in that large space of the contemplative and observant. It'd every bit as fascinating as the first half even if (or because) the listener's footing is less assured. 'Ghost Music' closes with a return to the original instrument, now heard in a steady rhythm with accent strikes here and there and ultimately a quicker, lighter beat atop.

A wonderful work and one of the more substantive pieces for solo percussion I've heard in ages. 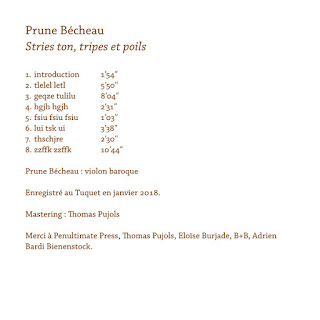 Like the above, also a solo recording, this time on Baroque violin, an instrument which differs from a standard violin in certain ways far over my pay grade to comprehend (but see here to understand more), played by the French violinist Prune Bécheau. Admittedly, coming into this recording (as with many solo ventures on "classic" instruments), I was hoping for any innovation, should it occur, to be more structural than having to do with extended techniques. Well, there's a bit of both here.

There are eight pieces and each demonstrates a different instrumental attack. The first, "introduction", probably carries the greatest allusion to a "traditional" sound, as a kind of melody--very lovely--circles around some grainy overtones. I should mention that the disc's title translates into "tone streaks, guts and hair, so you have a good picture of what's coming. In 'tlelel etl', Bécheau circles, arco, around a high pitch, generating a mosquito-like whine which she rapidly elaborates on within fairly narrow parameters, forming an impressive web that retains a plaintive air. Sometimes, as in "geqze tulilu", she manages to elicit a breathy sound more saxophonic than violin; if heard "blindfolded" I might have guess Michel Doneda. As mentioned earlier, part of me would like to hear this kind of approach used in service of a larger form, a more overall idea, but it's quite impressive on its own. Four shorter pieces investigate overtone manipulation that reminds me of some forms of Central African singing, a jaunty venture on a (near) single tone, a harsher, rubbery melodic line put through the wringer and a finely worried low string summoning images of North Africa. Bécheau concludes with the most complex work, 'zzffk zzffk', a swirling piece with buzzes, clicks, a certain rubbed attack that almost sounds like a chicken cluck and much more. It's an intense work, one I'd love to see performed live. As is, there's an abundance of fine material and deep, concentrated thought on display here. It's my first time hearing her work and eagerly look forward to more.

Which ringtone do you use?
Hello friends
Do you like live music? Powerful ringtones? Ringtones help us stay awake. I have collected a lot of powerful songs and created a unique ringtone for you to reference. Here are 5 hot tunes in 2018, you can install by following the instructions without spending a lot of time:

Visit my homepage to find more types of ringtones: https://ringtonedownload.in/

Your review will help me improve my ringtone better. Thank you!

An amazing testimony on how i conceive and also get  cure from my  fibroid permanently with his natural herbs , i wonder why people still don't believe that roots and herbs are very essential and fruitful in different aspect, especially when you can't conceive and bear children. I am a living witness because I tried all I could to be pregnant but all to no avail, on this faithful day, i decided to check the net for updates on healthy living and i came across testimonies of lot of women who Dr Onokun has helped with his native herbs to conceive. i decided to put a try because this has been my greatest problem in life so I emailed Dr Onokun, and he told me what to do which i did, after which he sent me some roots and herbs syrup and gave me step by step guild lines on how and when to have sex with my man. I missed my menstrual flow within a short period of taking it, and the doctor confirmed that I am pregnant. I am very glad to tell the world that I just put to bed a bouncing baby boy last week. Contact Dr Onokun for your own testimony on: Dronokunherbalcure@gmail.com Or WhatsApp: +2349064844957

Really nice and interesting post. I was looking for this kind of information and enjoyed reading this one. Go with our site webstagram to knwo top account on instagram.

Great thank you for sharing and I often download free best ringtones at https://ringtonescloud.com/

Which ringtone are you using for your mobile phone?
If you do not already have a ringtone, download a unique ringtone for your phone at the website https://toquedecelular.com/