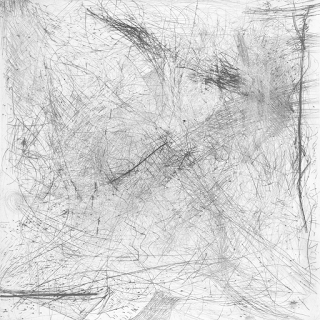 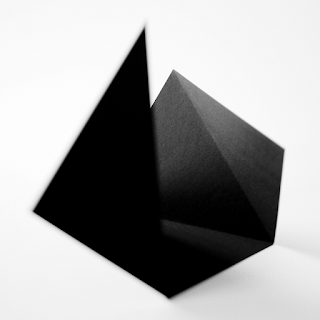 Way back when, I received a 3-disc set on Mattin's label, W.M.O/r that consisted of a performance by Keith Rowe and Seymour Wright that had been recorded from three vantage points. At the time, I happened to have three devices on which to play CDs (stereo, computer, Xbox) so I listened to them simultaneously, not worrying much about the slight but inevitable time discrepancies involved in turning on the machines. It was great fun and, in some ways, revelatory. The idea of a more active way of listening, even at home, was an intriguing one.

For some reason, this came to mind when listening to these two fine releases, though of course they're individual, isolated sessions and don't even share anything close to a common duration. Plus I have only a single means of playing the discs at this time. But Olsen and Drouin have worked and recorded with each other often in recent years and, even as these two samples show very different approaches, there's an affinity in play that make me think that synchronous listening might not be a bad idea. Well, maybe one  of these days...

Olsen's album strikes me as surprisingly programmatic, especially in this neck of the woods. Credited (on the bandcamp site, not on the CDr sleeve) with "guitar, field recordings, amplified copper plates, stones, and assorted objects", Olsen produces sounds that indeed sound as though their source might be within a cave. The guitar is often played low and echoey and various objects that might range from ping pong balls to billiards in addition to the stones, are dropped onto dryly resonant surfaces. The sounds are vivid but spatially distinct; as in his visual works, Olsen seems to take great care with a combination of placement and texture. Seeing flickers and shadows on the wall--Plato's cave, indeed. The voices which intrude, twice--"You ready?", a grunted reply--add to the disembodied mystery, the sounds liquifying toward the work's conclusion, retaining several loud clacks. Wonderfully constructed, of perfect length (some 26 minutes) and entirely engaging--might be my favorite music I've heard so far from Olsen.

'Paysage' was recorded between 2005-2009 on a "Moog-style 5U modular synthesizer system" and occupies a pulsing, blurred world, steady-state in a sense but constantly shifting within that condition. There are several "chapters" with varying characters, some carrying eerily vocal connotations, others with brief, empty digital spaces interpolated, some where the hums are steady, others where the pitch shifts subtly, causing a small sense of queasiness. I'm tempted, given the Olsen release, to take this disc's title at its word and conjure up programmatic content here as well, particularly when, as occurs some 16 minutes in, a sounds that could be interpreted as rainfall suddenly appears; somehow, a sun shower is evoked. But the pervasive mode is the drone--always very rich, sometimes fluttering, sometimes melting into droplets, here anxious, there relentless. It's a solid, engrossing set, entirely fine and absorbing on its own, even if I still have a slight hankering to hear it mixed in with 'Plato's Cave'.