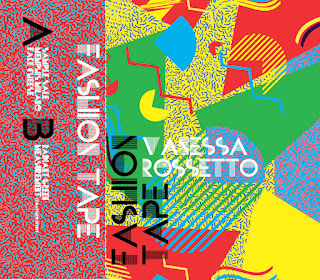 I just realized it's been ten years since Rossetto exploded into my musical awareness with the amazing trio of releases, 'Misafridal', 'Imperial Brick' and 'Whoreson in the Wilderness'--a highly enjoyable decade of rich, surprising music. I've missed a few of her most recent recordings, so I'm not sure how/if 'Fashion Tape' fits into the sequence or not, but it's yet another (to me) slightly unexpected direction, perhaps mostly in its usage of taped voice as a major element.

Rossetto has frequently used a combination of field recordings or other found sounds and music from either electronics or her own viola playing, the latter often imparting an unexpected and welcome melodic, even Romantic, element. In this collection of five pieces, a cassette release, the recordings tend to predominate, though I think the viola lurks just below the surface now and then. 'Sample Sale' begins disconcertingly with a mechanical, quasi-poppy sequence, a looped rhythm that's tinny and artificial-sounding, all the more so when a female voice (Rossetto's?) utters, "Welcome, please come in. This is a demo." in a detached, icy manner. We're then ushered into a public space, occasionally bristling with shards of electronics, filled with distorted voices, distant Muzak, complaining children and more. It's a space filled with sounds but somehow not dense; more ghosts than bodies. Swirling, metallic electronics scour the area clean of any human presence before the scene shifts and voices reappear, but hazier, more muffled, half-hidden beneath the sound of clinking, like a spoon in a metal glass. The choices are poetic, unsettling and hard to quantify but work marvelously. This longer track and the concluding one bracket three briefer pieces, three to four minutes in length. 'Memphis Milano' is the most disturbing one, a synth-y looping sequence bearing a vague similarity to buzzing insects, that maintains a mechanical regularity of rhythm while fluctuating in pitch, dynamics and number of lines but for all that, sounding like a reminiscence of some of the more aggravating examples of 1960s electronic music experiments. 'Fake Cheese' returns us to the environment explored in the first track (perhaps the intermediate cut was a kind of buffer or transition zone), the hubbub of the marketplace buried even more deeply under a thick, cottony thrum of electronics through the middle of the piece before emerging somewhat more clearly amidst harsher static etchings. A paranoid sounding man speaks of escape and culpability--again, disquieting and quite strong.

A different male's voice, sounding as though from Arkansas or thereabouts, begins 'Radiant Green', again seemingly troubled, going on about perceived manifestations of the titular color as well as white light, hiding from the truth and other defensive obfuscations. He wanders off, one imagines, and the sounds of the mall remain, serene and undisturbed, slowly gaining in volume and intensity before crackling apart. Rossetto's voice (I think) opens 'measurement', a track on which Matthew Revert also contributes, by repeating the title word in several layers. Once again, a man's voice enters (Revert's?) apparently doing some multiplication exercises. Beneath, there's the strongest possible evidence of Rossetto's viola or some other string source, very muted and quite poignant, like a fresh stream flowing under the mall's floors. The general sound-world morphs into something more "natural"; one hears birds, perhaps the chittering of other animals--it could just be a pet shop, though. The strings intensify and indecipherable voices are heard as the environs become more complicated, even hallucinatory. It's an amazing piece, every move both surprising and solid. Rossetto creates an eerie mini-world that one feels extends well beyond what she's happened to include in the recording, no mean feat.

'Fashion Tape' is a very fine addition to an already seriously impressive body of work. Give a listen.

Thanks for posting the useful information to my vision. This is excellent information,.
hydraulic road blockers
boom barriers